"It was really nothing more than Palestinians speaking about their lives."

If there was ever a time to get kosher or halal food in Pittsburgh while at the same time engaging in discussion about the Israeli-Palestinian conflict, this is it.

Two events planned this week are the latest development in a back-and-forth that's been ongoing since Conflict Kitchen began serving a Palestinian menu this fall. Conflict Kitchen is an art project run by Carnegie Mellon University that serves food from countries with which the U.S. is in conflict. Death threats closed the restaurant over the Nov. 8 weekend, and since then community conversations have increased, and media coverage has been global.

On Nov. 18, Conflict Kitchen, hosted a Palestinian potluck dinner at the East Liberty Presbyterian Church for the public to "meet, talk and break bread with Palestinians from the Pittsburgh community."

On Nov. 19 and 20, on both the Carnegie Mellon University and University of Pittsburgh campuses, students will hold pop-up restaurants called "CoExistence Kitchen" to raise awareness about peace efforts between Israel and Palestine.

Conflict Kitchen reopened Nov. 12 and was greeted by a line of customers. 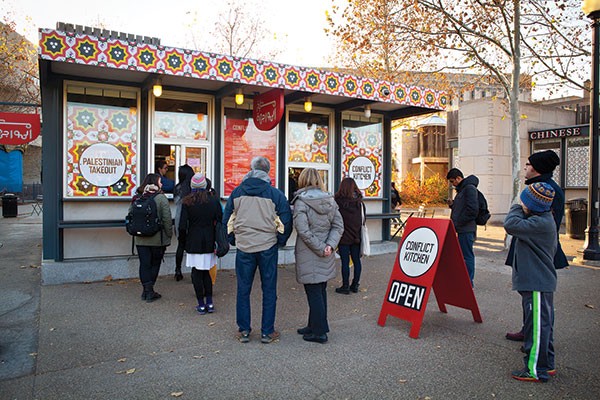 "I think what [Conflict Kitchen does] is amazing in giving a voice to victims of conflicts who are typically silenced," says Calvin Pollak, a Carnegie Mellon Ph.D. student in rhetoric, who visited Schenley Plaza one week ago for the re-opening of Conflict Kitchen.

Pollak sat over a steaming bowl of maftoul — a Palestinian dish of chickpeas, slow-cooked chicken and couscous. Despite the long line and the swarm of media — from local reporters to the Washington Post — Pollak, who is of Jewish heritage, came out in support of the restaurant, which has received criticism for being "anti-Israeli" and anti-Semitic.

"I think it's anti-Semitic to believe that all Jewish people must support everything that the state of Israel does," Pollak says. "Jews are just as diverse as any other cultural group."

Much of the media coverage and criticism has been over funding from the Heinz Endowments and about information pamphlets — sometimes used as to-go wrappers — that the restaurant hands out with each order.

It's no surprise that Fox News ran a headline on Oct. 24 reading, "Anti-Israeli restaurant receives funding from John Kerry's wife's foundation." A statement from the Jewish group B'nai B'rith International followed, asking the Heinz Endowments to publicly "disavow" its grant recipient. Heinz distanced itself in a statement but has since run a clarification defending the "right of artists and arts organizations to express their work freely and without fear of reprisal."

Locally, the Pittsburgh Post-Gazette ran a story on Nov. 6 focusing on the text on the food wrappers. Conflict Kitchen countered with its own statement criticizing the coverage.

The wrappers include anecdotes from Palestinians that restaurant staff interviewed this summer.

One quote reads, "It's a Bedouin tradition to serve tea and coffee to guests," while another reads, "Water, land and government services are taken away from Palestinians and given to Jewish settlers. ... They are creating a refugee problem. Israel knows this. They intend for the settlers to never leave."