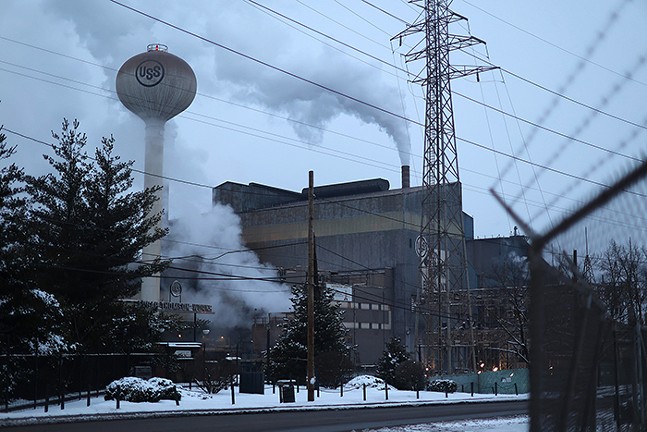 This rule, which has been in effect for decades under the federal Clean Air Act, measures and regulates limits for six pollutants often attributed with acid rain, smog, air pollution, and human health hazards.

While measurements for carbon monoxide, nitrogen oxide, ozone, and lead have been slowly declining in Allegheny County since the Clean Air Act was introduced in the 1960s, the region has often struggled to meet NAAQS guidelines for sulfur dioxide and atmospheric particulate matter, specifically larger atmospheric particles, known as PM2.5. These are big drivers in why Pittsburgh’s air quality has received failing grades over the years.

“The attainment of the National Ambient Air Quality Standards is an important milestone for our region generally and the environmental movement here specifically, but we still face significant air pollution problems,” says Rachel Filippini, Executive Director of Group Against Smog and Pollution.

Filippini marked the change in air quality as a positive outcome, but she and her peers at the Breathe Project are not positive these changes are here to stay.

“While news of reductions in air pollution in our county is always welcomed, the Breathe Project wants to make it clear that any victory celebrations would be premature and potentially misleading because of the particular circumstances in the data released in the county’s statement,” says Matthew Mehalik, Executive Director of the Breathe Project.

Although the improved air quality levels are a small win for environmentalists, there is increased concern that pollutant levels will rise once the majority of workers return to in-person employment.

Albert Presto is a professor and research scientist at Carnegie Mellon University who specializes in the study of hyper-localized air quality levels. He says air quality in the Pittsburgh region has been improving for years. “There are going to be fluctuations,” says Presto. “But the general trend is headed downward.”

However, Presto was quick to note that there is not one “singular event,” even the pandemic, that caused all the air quality improvements. Instead, he said “a basket of goods” was likely the cause, which include long-term enforcement of EPA regulations, the popularization of cleaner vehicles, and, most notably, the closure of coal burning energy plants in favor of natural gas facilities.

“The shutdown of coal-fired generating units in both Pennsylvania and upwind states in the Midwest helped reduce PM2.5 and SO2 levels enough to permit our region to attain the NAAQS,” says Filippini.

Allegheny County officials celebrated hitting the air quality mark for the first time in history, but acknowledge that the battle for cleaner air in the region is far from over.

Still, the battle for clear air between environmentalists and high-polluting corporations rages on in the region.

“Allegheny County needs to do a better job of addressing, and eliminating, short-term spikes of air pollution levels that occur in our region several days every year,” Filippini says. “The existing regulations do not do a good job of protecting communities nearby the Coke Works from the pollution the Coke Works produces.”

U.S. Steel spokesperson Amanda Malkowski defends the facility and says that "there were zero exceedances over the hourly max standards" at the North Braddock air quality monitor .

Despite Pittsburgh’s growing interest in alternative energy and technology, U.S. Steel is proposing a $1.5 billion Mon Valley Works upgrade project. It has become a cause for concern among groups like GASP and the Breathe Project.

“Communities in the Mon River Valley, especially those right along the river, bear the brunt of the pollution emitted from U.S. Steel’s Mon Valley Works and therefore stand to benefit the most from any reductions in pollution that occur at the Mon Valley Works,” Filippini says.

She states she wants to see a greater investment in “reducing our region’s contribution to the global greenhouse gas problem.” For Filippini, this would encompass all bodies of government and strict regulations for the region's largest polluters.

“Allegheny County Health Department and Pennsylvania Department of Environmental Protection’s enforcement of those laws must be vigilant,” says Filippini.

“In coming years, all levels of government that are responsible for making and enforcing air pollution regulations will need to address greenhouse gas emissions in earnest, to prevent or at least slow global warming,” says Filippini. “Regulators have paid too little attention to this in recent years.”