As a performer and producer, John Dick Winters is a big part of Pittsburgh’s comedy scene

“Telling crude jokes about all sorts of topics isn’t funny.” 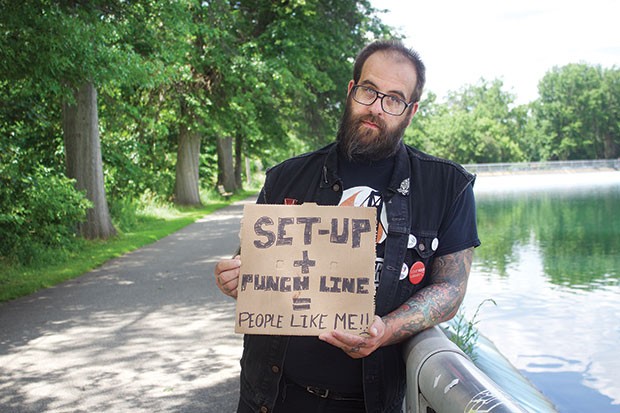 In a favorite bit, comedian John Dick Winters wonders: What would it be like if he, someone who finds cat-calling gross and sexist, engaged in some himself? He figures he’d say, “Hey, cool butt,” followed by an appropriate display of shame. The bit has gained life off the stage, with Winters putting the quote on T-shirts and stickers.

Winters is a big part of the burgeoning local comedy scene. Outside his standup work, Winters also hosts and produces comedy shows including the monthly series Comedy Roulette: Comedy With a Catch. While his involvement in the scene is multi-faceted, Winters maintains his focus.

And he wants to be known nationally.

Winters has already had his name listed alongside a nationally recognized act. In June, he opened for comedian and The Sarah Silverman Program actor Brian Posehn at the Rex Theater. Winters often does standup multiple times a week, on top of regular hosting duties for Comedy Roulette, and is co-founder, with four other local comics, of the mordantly named Race to the Coffin Comedy Collective. He recently completed a tour of small venues in six Midwestern states. On Sept. 25, he opens here for nationally touring comic Sean Patton, at Club Café.

Winters, 34, is rotund, bearded and staggeringly tall. The Troy Hill resident is a father to two twin girls, and to pay the bills he drives for Uber and does odd jobs on Craigslist. The comedian, who previously spent time as a cook and musician, is originally from Altoona. He moved to Pittsburgh in 2002, and performed comedy for the first time on Jan. 24, 2012 — he handily provides the exact date.

This past June, Comedy Roulette took place at Club Café, drawing a respectable 50-plus people before the late-night show began. It was right in the middle of the Stanley Cup finals. “I want to thank the Penguins for playing tomorrow and not tonight,” Winters told his audience. “That was nice of them.”

It wasn’t a wholesome show, but Winters has his limits. Rape jokes are one example.

Winters has a politically progressive viewpoint, something he was actually mocked for at that roast. Participants included Jesse Irvin, a friend and frequent collaborator. The two traded jabs. Onstage, Irvin told Winters that he “is more of a phony feminist than Ivanka Trump” and has “fucked more women than Mike Pence.”

“I like jabbing John because when he first started, he came off as preachy,” Irvin later said. Irvin says that Winters has come a long way. “I think when he started out he had so much to say that it wasn’t resonating with people,” he says.

Irvin describes Winters as determined and dedicated. “He doesn’t give up on something when he wants it,” he says.

Together, Irvin and Winters founded the Burning Bridges Comedy Festival, an annual, multi-venue event that completed its second season this past May. The 2017 festival, which featured both local talent and nationally touring acts including Aparna Nancherla and Reformed Whores, drew about 600 attendees over its three-day run, according to Winters.

Another comedian in the June roast battle was Suzanne Lawrence. When Lawrence started out doing comedy in Pittsburgh, Winters was one of the first comics to notice and talk with her, she says. She felt like the new kid at school. Starting out “is sort of like walking into the school cafeteria and everyone knows each other already,” she says.

Later in June, Winters was among several comics who performed a weeknight show at Brillobox, in Bloomfield. He made fun of himself. One bit was mostly physical: He raised his arms above his head until his T-shirt slid above his gut. Then he lowered his arms to show how shirt doesn’t go back down, it just rests on top of the fat.

He also talked about how Amazon recently recommended to him a DIY book about suicide. A book like that could challenge libraries to change policies, he posited.

“What’s that?” he imagines a librarian telling someone. “No, you can’t go read it in the bathroom.”