While the festival is showing more public art this year, the overall effect is a little too understated. 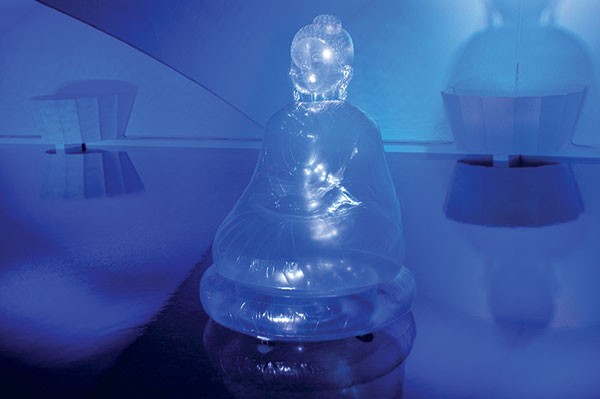 This year's Three Rivers Arts Festival highlights Pittsburgh's waterfront with the re-opening of the Point State Park fountain. Sitting dramatically at the confluence of three rivers, it offers the perfect opportunity for eye-catching public art along the waterfront or in the rivers.

Alas, while the Pittsburgh Cultural Trust-run festival is showing more public art this year, the overall effect is a little too understated.

Based on advanced description, it sounded like Chang-Jin Lee's "Floating Echo" would be situated on the river, as it had been in New York City. There, this large transparent inflatable Buddha was animated by the weather, the natural landscape, the architecture of Manhattan in the distance and the rippling water. It functioned as both a meditation on spirituality and a commentary on kitsch.

In Pittsburgh, "Floating Echo" instead occupies a cramped space beneath the Point State Park Portal Bridge. Barely floating in shallow, still water, the piece loses much of its ethereal quality. Accentuated at night by a backdrop of changing colors, the Buddha tips decidedly away from the meditative and towards an oversized trinket.

The colored laser beams that descended dramatically from the top of PPG place to fall on the fountain, however, were more appropriate. Scheduled for the first three nights of the festival, "Pittsburgh: Spectral Ascending," was designed by Lightwave International with Yvette Mattern.

Currently, only two other public artworks occupy festival grounds. Hugh Hayden's "American Hero #4" sits on a lawn painted white at Gateway Center. It is a classic Ford Mustang, also painted white and decorated with two black racing stripes made of hair braided into cornrows. Hayden's use of hair as commentary on cultural identity builds on work by more established artists such as David Hammons. And Vanessa German's "Art House" is a hands-on space of creativity and imagination, located in the Creativity Zone.

Two more public works are scheduled for the festival's closing weekend (June 14-16). "Instabiles," by Andrew Hieronymi and Ian Brill, will be an interactive installation, and "The Drift" will be a collaborative performance space that actually floats on the river.

Looking ahead, in September, the Cultural Trust is bringing Hofman's ducky here, which portends positive developments in river-based public art.