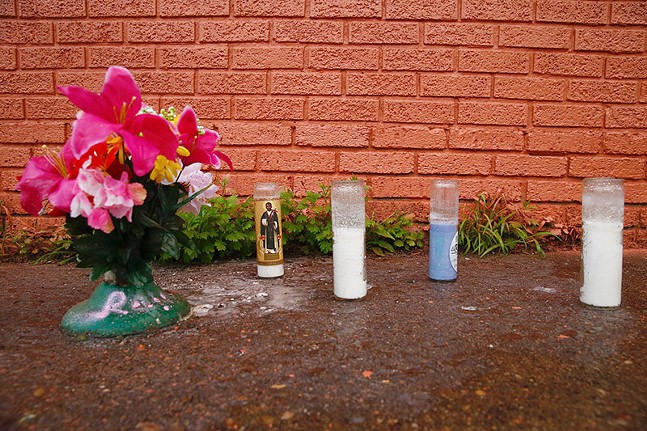 CP Photo: Jared Wickerham
Flowers and candles left in front of a painted-over Ramir Talley mural in Wilkinsburg
Three artists are facing felony charges for painting a mural honoring Romir Talley, a Black man killed by Wilkinsburg Police last year. The officer who reported the mural, Robert Gowans, is the same officer who shot and killed Talley in December 2019.

Talley was killed last year, but Gowans’s identity as the officer who shot him was only revealed last month. Since Talley’s death, his family and the Wilkinsburg community have been demanding transparency from the borough and Allegheny County investigators. 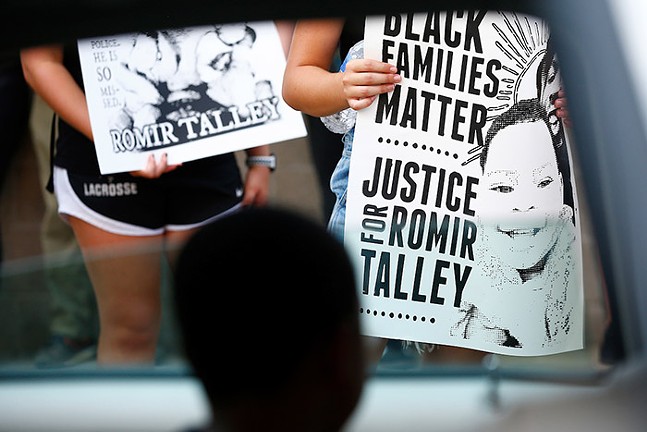 CP Photo: Jared Wickerham
The son of Romir Talley looks out of a car and at signs carried by protesters at a rally for his father in Wilkinsburg on Sat., Aug. 22, 2020.
The original mural had featured Talley’s face prominently, surrounded by roses and the years of his birth and death. It was painted over earlier this month as part of a closing agreement with the owners of the building in the 700 block of Penn Avenue in Wilkinsburg. The new owners did not want it on their property.

“It just shows the level of indecency and depravity that this family is having to endure just to get answers about the final moments of their son’s life,” said Miracle Jones, director of policy and advocacy at 1Hood Media, in an interview with WESA.
“That the officer who shot someone can be the same officer who is the catalyst to getting the mural taken down and getting people charged with felonies for trying to uphold the memory of a son that was stolen from us. The community is outraged.”

The charges could result in jail time of up to a year for the mural’s creators.

One of the three artists charged, Conor Clarke, 29, has created other Black Lives Matter murals in the Pittsburgh region, including one Downtown which showed the faces of other Black people killed by police, including George Floyd, Breonna Taylor, and East Pittsburgh youth Antwon Rose II. That mural, however, was left alone, and Pittsburgh Mayor Bill Peduto previously instructed the city’s Department of Public Works not to remove it.

CP Photo: Jared Wickerham
Protesters demand justice and answers in the death of Romir Talley while marching through the streets of Wilkinsburg, stopping in front of the police station, on Tue., June 30, 2020.
“I don’t have any regrets in anything that I’ve done. This is for people that have been oppressed,” Clarke said in an interview with WESA.

1Hood Media has offered to financially support a replacement mural honoring Talley, and has reached out to Clarke to potentially paint it. A new location has not yet been named.

A GoFundMe crowdfunding campaign was started last week to raise money for legal funds for the three charged artists. As of today, it has surpassed its goal, raising nearly $12,000 to go towards legal support, court, and bail fees that they may face. Surplus fund will be given to the Talley family.