Artists explore their Obsessions at Space

The exhibition suggests the revelation of personal secrets

Obsessions takes its title subject personally. The pieces in this SPACE gallery exhibit are not sweeping social commentaries or cultural criticisms, exploring a society prone to obsession — with money, objects, celebrities, taking pictures of themselves. Rather, each artist narrows in on what has planted its flag in his or her brain space. As a result, the show, curated by Tom Sarver, is fun and communicative.

Jeremiah Johnson contributes more than a dozen works, with recurring themes and images. Ranging from large paintings to smaller prints, often heavy with text, the Williamsport, Pa.-based artist delves into his own thoughts, philosophies and relationship to his work. "The Tree of Knowledge of Good and Evil" has a background of often-repeated images of devil-locked goth girls in cheerleader sweaters, fashion models, helmeted football players, city scenes of sagging buildings and country scenes of cows grazing in snow. Painting on top of but not obscuring these is an enormous tree, in summer, leaves bright green and blown, roots digging into the earth. Many of the images here continue in other works, embellishing a distinct and personal narrative. "(Kevin Hays)" contains the bulk of the text, stream-of-consciousness ramblings and ruminations on art, work, illness, sleep. Some of the best words are the philosophical statement, "Don't let people tell you what to do because you know how to do better than anybody else. Or ... in life be moderate but in art it's sometimes necessary to give people a good stiff punch in the gut." 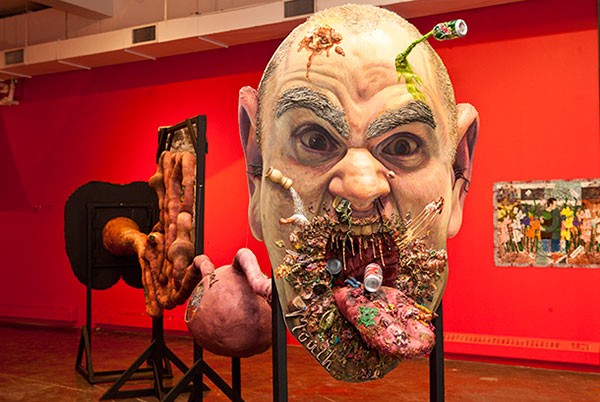 Becky Slemmons' offering explores one of the first things that comes to mind when "obsession" is mentioned. "Obsessive love, one mark for each of the 9331 days we have been together ... and counting" is exactly what it sounds like: a gallery wall on its way to being filled with tick marks representing the time she's known her partner. Slemmons, who lives in Pittsburgh, will often be present in the gallery adding to this piece.

Jason Lockyer's focus is on animals and insects, the former through drawings and the latter through digital video. "Drawings of dead stuff from Museums" collects renditions of taxidermied creatures ranging from the familiar ground squirrel and mole to the exotic-sounding pademelon kangaroo and dusky-footed woodrat. Lockyer, of Los Angeles, has drawn them all on identically sized paper in thick, percussive black lines of wax and pigment, all somewhat vermin-y, all a little wild-looking around the eyes. All look like they might nip you a good one even if they're kind of cute. The video "Everyday is a dream when you're alone" documents the activities of a busy bug. It's installed in the gallery's front window and can be viewed only from outdoors, speakers delivering the soundtrack to the sidewalk. This is a great technique, and doubtless has drawn people inside to see what else there is to see.

The human body elicits Nathan Margoni's concentration, and the works he presents are not in any way a celebration of its beauty. In "Run For Your Life," a pencil drawing of a giant foot floats above the viewer's head, toenails overgrown and cracked, life-sized trash embedded in the sole — Dunkin Donuts cup, Lowe's receipt, coins. Faces burst screaming from toepads and cracked heel. "Journey Through the Digestive System" cross-sections a colossal man swallowing a writhing miniature one, with other figures progressing through his body to the inevitable end. "Digestive System" takes it a step and dimension further. It's a large sculpture, a florid face with gaping maw at one end followed by the neatly labeled "Esophagus," "Stomach," "Small Intestine" and "Large Intestine," each bearing a window of clear acrylic so we can peer at what's been consumed as it travels along. In the back, there is a literal shitshow. Funny and gross, and I'm pretty sure kids would love it. Margoni lives in Benton Harbor, Mich.

"A cruel country where I am no longer afraid" is three identically sized panels by Pittsburgh-based Laurie Trok, inked and cut paper suspended from the ceiling. The obsession here is not referenced by the abstract work, but is the work itself, generated by a painstaking process that results in three-dimensional pieces playing with shadows and light. These are hung into a triangle equilateral but open at the corners, so it can be experienced either by navigating its perimeter or entering its confines.

A large wall bears Mary Ivy Martin's "Face Faucet," a video close-up by this Brooklyn-based artist of water (perspiration?) dripping off nose, cheeks and chin to quench a plant. It's a demonstration of caring and of interrelation with nature, supplemented by a second, untitled work, potted plants built of rosemary and hair.

The exhibit gives you the sense you've been told a personal secret by each artist, connected to them. "Obsession" feels likes a positive thing.