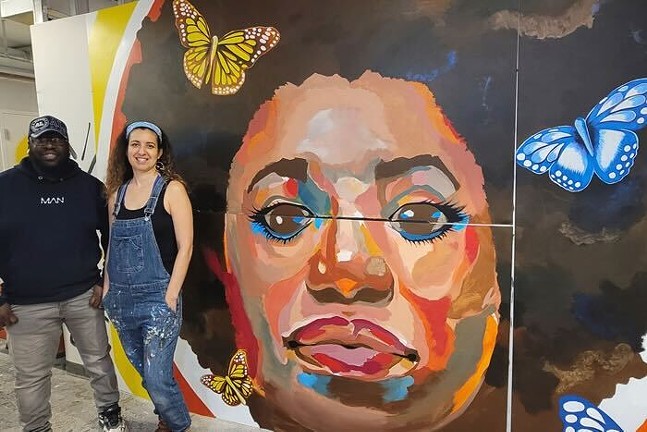 Public art, specifically murals, has become increasingly important in the Pittsburgh arts community. Back in 2003, "Lend Me Your Ears," a mural by Jordan Monahan, executed with assistance from Alison Zapata, was one of the many art projects that welcomed visitors to and honored the residents of East Liberty.

But in 2015, "Lend Me Your Ears" was painted over, and soon after, the language-learning software company Duolingo took over the 5900 Penn Avenue property where the mural had been. Many in the community viewed this as a result of the rampant gentrification plaguing the neighborhood and critiqued the decision to paint over the mural.

As a response to the concerns and criticism, Duolingo promised $150,000 in grants focused on “creating public artwork in Pittsburgh and supporting local artists and arts organizations.”

Zapata and fellow artist Natiq Jalil collaborated on a new mural project supported by Duolingo, titled "The Legacy of Butterflies." On April 6, the work was unveiled after years of planning, and can now be seen on a residential apartment building across the street from Duolingo, called East Liberty Place South, located at 5800 Penn Ave. The work depicts Cecilia Price-Knight, owner of the East Liberty Jamaican restaurant Impressionz, which closed in 2016.

The mural marks the first piece of public art to come out of Duolingo’s Community Arts program.

CP Photo: Amanda Waltz
"The Legacy of Butterflies" mural in East Liberty
Jalil says he was still living in New York City when he was approached by Zapata about the mural. He says working on the piece was different from painting on canvas, which is what he usually works with, and that it also required using protective elements to help the mural sustain damage associated with UV rays, rain, and other harsh conditions.

Jalil also says he used a new method: painting the mural in pieces than combining them together.

"It took well over a year to complete the red tape portion of the project, such as contracts and other paperwork, sourcing materials and supplies, securing permits, etc.," Jalil tells Pittsburgh City Paper over email. "It took about three to four months of actual painting time to complete the six panels that make up the mural."

"The Legacy of Butterflies" adds to "To Be Human," another mural wrapped around parts of Duolingo's 5900 Penn Ave. headquarters. Completed in Oct. 2020, "To Be Human," which was executed by Detroit-based artist Ann Lewis, was cited by Duolingo as a response to the community's outrage over the loss of "Lend Me Your Ears," and included outreach to local students, as well as a complementary project by Pittsburgh filmmaker Chris Ivey.

Jalil says that while making "The Legacy of Butterflies" presented its share of challenges, the project was still rewarding.

"Overall, it was a great experience," says Jalil. "There were many setbacks, including losing the project at one point, then having to negotiate on what we could paint, then getting paperwork signed. However, once we got the panels into the studio, it was nothing but fun. We had an amazing time."