“What we are doing here today is using art to form unity and inspire more people to practice self-love, Morris says during the project launch on Saturday. “People need to know that they are creative and unique in their own way.”

The project will be conducted in three phases. Phase one involves a Stop the Violence mural that will be painted entirely in orange. The mural is located by the Communitea Cafe on Center Avenue in Pittsburgh’s Hill District. Residents will be able to see the mural as they walk into the soon-to-open Salem’s Market and Grill in the Spring of next year. The location will be an expansion of the original Salem’s Market and Grill that is located in the Strip District.

Holbrook and Morris took part in making the mural, but they’re relying on volunteers from the community for the bulk of the painting. 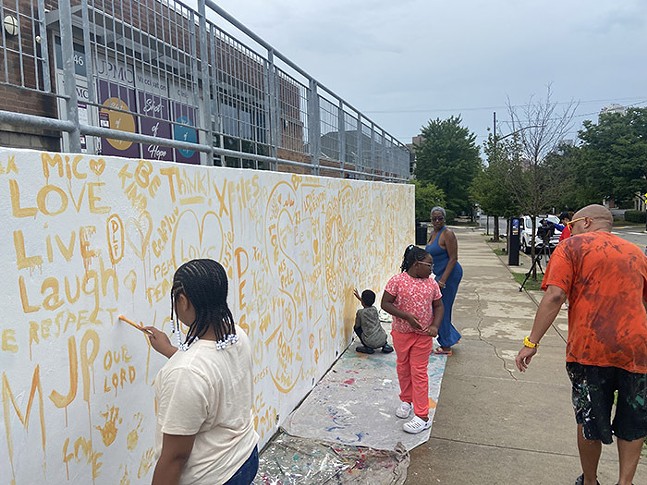 Several city police officers also took part in painting the mural, which fell on the three-year anniversary of the death of fellow police officer Calvin Hall.

From August to October, Holbrook and Morris are expected to be joined by over 500 artists from around the world to start phase two.

The front of Salem’s will depict the store’s history alongside healthy eating encouragements and community images. The back of the store will showcase the history of the Hill District.

Next Year, Holbrook says he plans to take the project to a new level.

“In 2023, we plan to do a sculpture and mosaic walkways with QR,” says Holbrook. “People can own a QR code, and that code will make an augmented reality that they can walk into with their phones. People will find all sorts of things while doing it including coupons for Salem’s.”

He plans to follow that with lights and seating for Pittsburghers to enjoy some outdoor dining.

For Holbrook, the assignment seems natural. Aside from generations of his family growing up here, Holbrook depicted the Granada Theater on the side of Black Beauties Lounge in 2007, and painted the August Wilson Mural in 2014.

“People forget that the Hill District used to be a mecca for entertainment and art,” Holbrook says. “Not just for Pittsburgh, but the entire world. We are working are way back to that. We have so much talent here that is going to be great for our future and it is exciting.