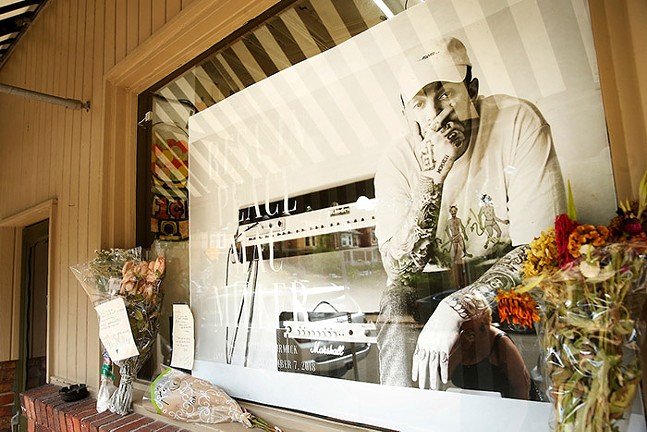 CP photo: Jared Wickerham
Mac Miller memorial in the window of Frick Park Market, where the late rapper filmed a music video, Sept. 15, 2018
In 2018, Pittsburgh was rocked by the death of rapper and producer Mac Miller, a Pittsburgh native who, despite reaching worldwide fame, never forgot his hometown. To honor his memory, the Pittsburgh Foundation’s Center for Philanthropy has launched a new arts funding initiative to support local BIPOC artists.

The Pittsburgh Foundation announced the BIPOC Micro-Grant Program, which would award 75 micro-grants of $1,000 to Black and Indigenous artists, or artists of color, in and around the Pittsburgh region. Funding will be provided through the Mac Miller Fund, a charitable effort created by the foundation and the family of the late Mac Miller, whose given name was Malcolm McCormick.

“This program is yet another wonderful example of how the fund is channeling Mac Miller’s spirit in the Pittsburgh region and the rest of the country,” says Pittsburgh Foundation CEO Lisa Schroeder in a press release. “As his fame skyrocketed, he shared his musical artistry generously — allowing people to internalize it however they would choose, and he reached out broadly.”

Kelly Uranker, vice president of the foundation’s Center for Philanthropy, adds that the program is a way to “carry forward Mac Miller’s creative and artistic legacy and his family’s vision for helping artists, particularly younger artists, recognize their full potential.”

The application says funds are “to be spent at the artist’s discretion and are not meant to fund specific work or works.” A press release expands on this, saying grants are “practice-based, so that recipients have the freedom to use the awards on whatever they choose.”

Applications for the BIPOC Micro-Grant Program are open through July 23. The program is for artists who live in Allegheny County, as well as in the counties of Armstrong, Beaver, Butler, Fayette, Greene, Indiana, Mercer, Lawrence, Somerset, Venango, Washington, and Westmoreland.

Recipients will be notified by Sept. 1.

Schroeder believes the grants will contribute to making the arts scene in Southwestern Pennsylvania more equitable. To further ensure this, applicants will be reviewed by a selection committee that will include BIPOC artists, who will be confirmed with information posted on the Pittsburgh Foundation website.

“While there is much more work to be done in supporting racial diversity in our region’s arts community, we are grateful to the family of Mac Miller and our Center for Philanthropy staff for collaborating to develop such a powerful program,” says Schroeder.

The BIPOC Micro-Grant Program application can be found on the Pittsburgh Foundation website.