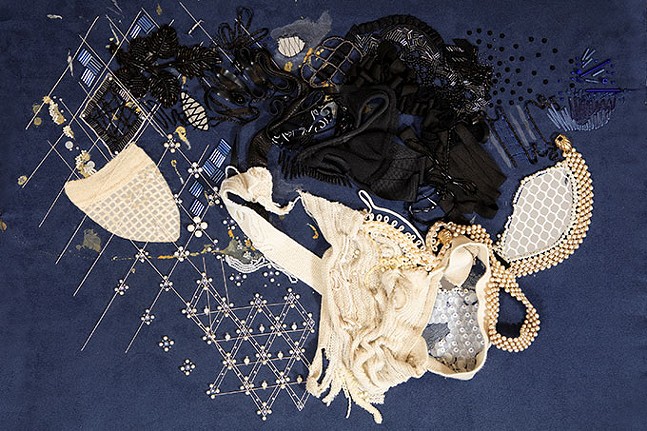 Photos: Théo Bignon
Studio shot of Indecent Exposure
Who decides what is excessive?

This question drives Indecent Exposure, an exhibition at Bunker Projects featuring new work by resident artist Théo Bignon. With this inquiry, Bignon, a French artist who previously studied at the University of Pittsburgh Studio Art Department and now lives in Chicago, Ill., intends to examine how, among other things, “homosexuality and queer desires trouble the idea of the natural and are insulted as being unnatural, excessive, and inappropriate.”

By using provocative embroidery and fetishized garments such as underwear, jockstraps, and tank tops, he turns the homey gallery space into a site of “forbidden desire, untamable sexuality, and voyeuristic play.” He will also share his craft on Thu., Aug. 8 during an embroidery workshop.

Ahead of the show’s opening on Fri., Aug. 2, Bignon took time with Pittsburgh City Paper to discuss how the how his identity as a gay man and his French upbringing informed the show and how the American fiber art movement inspired him.

How did you come up with the concept for the exhibition?

I was initially planning a whole different exhibition, but it changed once I got to Bunker Projects. The gallery space is this gorgeous former living room and dining room of a traditional Pittsburgh house with moldings, a beautiful cheminée [fireplace], and hardwood floor. Instead of erasing this aspect of the space and seeing it as a white cube, I wanted to highlight the domestic aspect of it …

Besides, coming back to Pittsburgh — I used to live there four years ago — really felt like a sort of homecoming and just reinforced my wish to play with this idea of the house and decided to make curtains, add new moldings, and fragments of wallpaper on the walls.

The title of the exhibition … is directly linked to a material that is a leitmotif in the show: mesh. Because it is at the junction of functionality and decoration, and due to its intersection with queer cultural history — for example, the mesh tank top became a semiotic marker for a lot of queer men starting in the ’70s — this whole exhibition is examining and playing with this material. It is wild to think that a male torso dressed in mesh is fine and sexy, but on a woman’s torso, it is often illegal and can result in a charge for indecent exposure.

Do you have a background in embroidery and needlepoint?

I was never formally trained in embroidery or needlepoint … But since a young age — probably around 9 — I started embroidering with my grandmother. I used to spend every summer with her in the French Riviera. She was a cross-stitch kinda gal and very into flower designs. I would sit next to her and embroider for hours. I would never follow the pattern, though, and would throw in some other colors or pattern. That used to drive her crazy. I’ve always had an ongoing embroidery project, often sitting on my bedside table.

But once I was done with undergrad [at Sciences Po Paris] and was in the U.S., I became aware of the existence of the fiber art movement and that I could use needlework in a fine art context. I am always amazed by how many different traditions of embroidery exist around the world … for example, in this exhibition I have been using a lot of beading techniques frequent in French haute couture. Ironically, I moved from learning cross-stitch from my grandmother — the ultimate hobby kind of embroidery — to do a master's degree in textiles [at the School of the Art Institute of Chicago].

It seems like the show plays with how society projects desire and assigns meaning to certain objects. Would you say that’s true?

A lot of the work from this exhibition started from my research on the classic mesh tank top of the ’70s, an object of queer desire and queer meaning.
But it is the same thing for embroidery, very often projected as a women’s hobby, or even swag curtains seen as not fashionable anymore — all of these items are in the exhibition. The self and the collective cannot be dissociated, and since so many of our daily activities and interactions are mediated through objects, I believe every object is charged with complex histories. My interest in textiles, in general, is founded in the fact that we have such a daily bodily experience with it — it is therefore very intimate and full of desire, from that fancy outfit you can’t afford to your lover’s worn underwear.

What’s your own experience with the show’s themes?

I have never been arrested for indecent exposure but could have been. More seriously, this exhibition is pretty personal: it consists [of] a lot of embroideries that are coded with elements of my own sexuality and experience, wallpapers with hidden clipped digital images of amateur porn, and some garments I made for myself in this same vein. I feel like as artists we spend a lot of our time showing what’s pretty intimate, and it can feel like an indecent exposure sometimes … I am pretty sure some people will deem the work indecent, but depending on who thinks that, it might be a good thing.

I remember what it was for me to be young and to see evidence of gay and queer sexuality in museums or galleries. It felt good. It felt like I wasn’t alone. I usually hope for a lot from the viewers … but if a single person leaves the exhibition feeling that their feelings and desires considered deviant or indecent are valid, then I would be very, very happy.