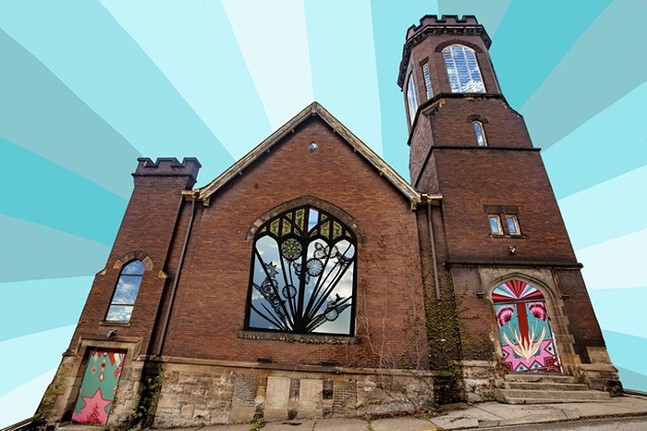 Photo: Courtesy of the Cultural Counsel
Artistic rendering of The Sanctuary
Artist and filmmaker Caledonia Curry has a special relationship with a church in North Braddock. In 2007, Curry, who works under the name Swoon, was invited to purchase and restore an abandoned church on Jones Street. Since then, the property, under Swoon and a team of fellow artists, has undergone a series of transformations, from housing a ceramic studio and creative workshop called Braddock Tiles, to serving as a showcase for public murals.

Now, Swoon has launched a Kickstarter campaign to turn the site into what an email statement calls an "art-filled community center and transitional living space for the homeless and people with addiction issues and criminal records."

The campaign, which is accepting donations through Mon., May 30, will help turn the former church into The Sanctuary, a temporary living space that will serve to "address the housing discrimination faced by people with criminal records and strengthen family bonds by providing apartments where families can stay together, rather than risk having children lost to the foster care system." Funds raised will go towards replacing the structure's 39 windows, including adding a large stain-glass window designed by Swoon and handcrafted by local artists who are also members of the Za'kiyah House community.

According to its website, the Homewood-based Za'kiyah House opened in 2018 to house men in recovery between the ages of 18-65 in need of a temporary sober living environment. In January 2022, Za'kiyah expanded this mission to Donnelle's Safe Haven for Women in Braddock, which offers to house women returning from incarceration.

The project is a personal one for Swoon, who, according to an email statement, grew up with drug-addicted parents who went through the U.S. incarceration system. This led her to start The Heliotrope Foundation, a local nonprofit designed to help "communities in crisis through artist collaborations."

Swoon, who was born in New Haven, Conn. and raised in Florida, has gone on to great success as an artist with shows throughout the U.S. and the world. She is credited as being featured in the Brooklyn Museum's first solo exhibition by a living street artist, and her work is in the permanent collections at the Museum of Modern Art, The Institute of Contemporary Art in Boston, the Tate Modern, and other institutions.

In 2020, she opened her first solo show in Pittsburgh, The Heart Lives Through the Hands, at Contemporary Craft.

The Kickstarter page says the project needs to raise around $100,000 in order to replace all of The Sanctuary's windows. Those who donate will receive perks ranging from limited-edition prints, to stickers and greeting cards by artists like Shepard Fairey, Nelson Makamo, Ebony Patterson, and others, as well as totes and pins designed by Swoon.