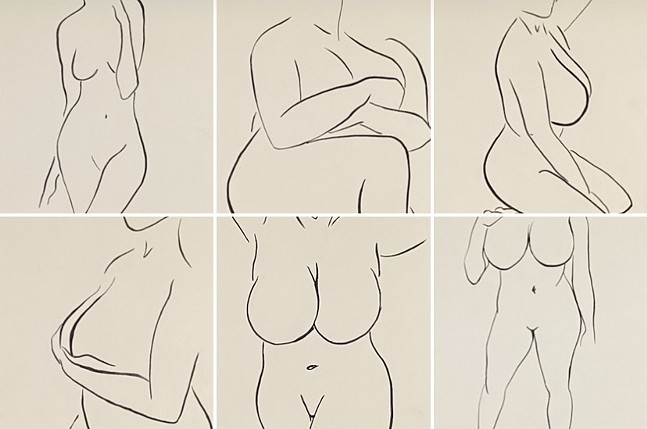 Opening Sat., March 6, the show includes 40 linework portraits of nine women representing different shapes, sizes, ethnicities, and backgrounds. Muse marks the first solo gallery exhibition for Bialecki, who produces art under the name L'Instant, and also runs the Alchemy Dry Cut Lounge hair salon in Lawrenceville. She has previously shown at Commonplace Coffee with Spirit Of Our Sisters, an art show meant to spotlight the shocking rates of murdered and missing Indigenous women and girls throughout North America.

Bialecki says Muse started when a woman she was designing a website for, Mackenzie Horne of Deep Green Ink, asked to be paid with art.

I said, 'You know, if you want a piece of my artwork, that's fine, but would you let me draw you?'” says Bialecki.

Bialecki says Horne's response to the painting was “so touching and so beautiful.”

“All of those things, when we look at our bodies and are so hard on ourselves, she said they just fell away,” says Bialecki.

Horne expands on this, adding, "Seeing ‘my body’ through such a staunchly minimalist lens makes it easier for me to let those little nit-picky things I’ve always hated about my body just fall by the wayside.”

Bialecki says she wanted to bring that experience to other women. She reached out to a number of women she found inspiring, ranging from other stylists to boutique owners, to women who were advocates for the body-positivity movement.

“I was a little bit nervous reaching out because I'm basically being like, 'Hey, send nudes, let me draw you,'” laughs Bialecki. “Some of the women were like, 'I've never done anything like this, but I want to be bold enough to do this.'”

She adds that her subjects, who sent images ranging from selfies to professional photos, could be clothed based on their comfort level, as long as she could see the “lines of their body.”

"I really wanted the muse to have a say in how she was represented," says Bialecki.

The portraits resemble the simple, fluid forms of Henri Matisse, capturing the bodily outlines of women in various poses. Some are more detailed, with exposed nipples added, while others feature arms crossed over breasts, or more posed similar to a boudoir photo shoot.

The show also features a collaborative piece with Malcolm Xavier, a Pittsburgh-based mixed-media artist who added vibrant gold, red, and black elements to one of Bialecki's pieces.

After Muse, Bialecki wants to pursue something with a friend who works with incarcerated women. She says many incarcerated women have experienced abuse and sexual violence, and that she hopes to help them heal by possibly getting them involved in a painting project.

Overall, Bialecki says the feedback from her Muse subjects on seeing their portraits has been overwhelmingly positive.

“The response was, 'Wow, I'm usually so hard on myself, and I just feel beautiful,'” says Bialecki. “It's amazing to be able to share that with somebody.”Muse by L'Instant Opening Reception. 6-10 p.m. Sat., March 6. On view for a limited time. Thoughtrobbers Gallery. 438 South Main St., Suite 100, West End. Free. thoughtrobbers.com