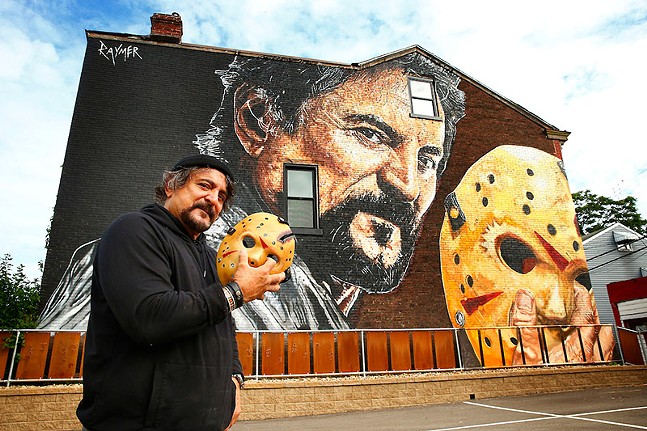 CP photo: Jared Wickerham
Tom Savini poses in front of the mural Pittsburgh artist Jeremy Raymer painted of his likeness in honor of his work on Friday the 13th movies
When I got a text from Pittsburgh muralist Jeremy Raymer asking if I’d photograph him and his most recent subject — special effects makeup artist, actor, and director Tom Savini — I was stoked.


The mural, located between 40th Street and Almond Way in Lawrenceville, is a larger-than-life homage to Savini's work on the Friday the 13th movies. It shows the makeup artist staring sternly into your eyes, holding the famous hockey mask worn by the film's star.

What I wasn’t expecting was to start talking photography, dodging, burning, and developing with Pittsburgh's own horror king. It turns out Savini was a combat photographer during the Vietnam War and, in addition to documenting various sites and vehicles and machinery that had been damaged from the violence, he was tasked with developing rolls upon rolls of aerial surveillance images from planes. He told me that up until recently, he still had a color darkroom in his house. 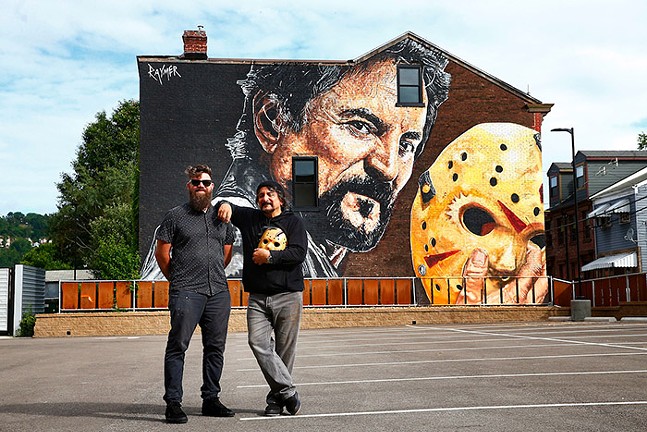 CP photo: Jared Wickerham
Mural artist Jeremy Raymer and Tom Savini in front of the mural
After doing a few portraits in the parking lot of the TRYP Hotel (where horror fans will be able to book a mural-facing room once the hotel determines it's safe to do so because of COVID-19 policies), the owner of the home where Raymer painted Savini on its exterior wall agreed to let the pair in for some portraits hanging out of the windows.
click to enlarge 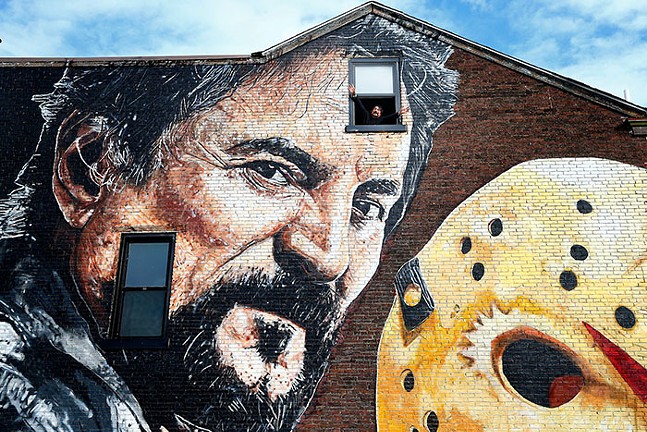 CP photo: Jared Wickerham
Tom Savini poses in the third-floor window of the house with his mural
The only problem was that the third floor window, which made the most sense aesthetically to photograph Savini in, was not easily accessible. After the 73-year-old hopped the fence to the house and got inside, he then climbed a ladder, held onto by Raymer, that was hoisted on a box. The dude is crazy in every sense of the word, especially after nearly putting himself in the running for a Darwin Award by almost killing himself posing for his own mural.

Photo: Jeremy Raymer
Tom Savini and Jared Wickerham
Once the photos were all done and we stood chatting as the rain started to fall, I jokingly told Savini to be careful as most of Raymer’s other murals depicted people who are no longer with us (Roberto Clemente, Mac Miller) or are incarcerated in the case of Joe Exotic of Tiger King.

Before we left, though, Savini said, “This is better than a walk of fame star!”