Thomas manages to make something look both simple and complex 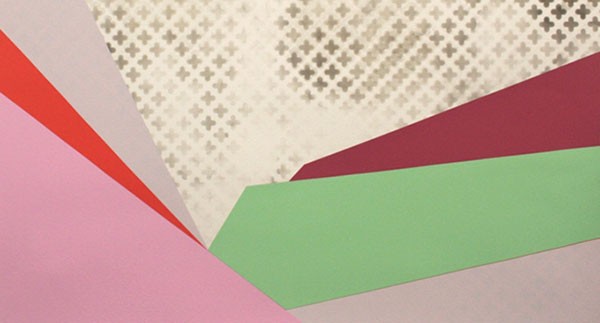 From Lenore D. Thomas' "Somewhere in Between"

SOMEWHERE IN BETWEEN: LENORE D. THOMAS

Stare long enough at "Somewhere in Between," a site-specific wall installation by Lenore D. Thomas at Pittsburgh Center for the Arts, and you might think your eyes are playing tricks. While the images are based on how we perceive multidimensional space, they are actually changing very slowly. What initially suggests a stagnant pattern is really a projection based on a mathematical concept. In basic geometry there is a flat plane square. But put six of them together on a flat piece of paper and they appear as a three-dimensional cube. Thomas expands on this concept by presenting a pattern of five-cubes, or penteracts, that slowly blur and morph into six-cubes (hexeracts), seven-cubes (hepteracts) and eight-cubes (octeracts).

The use of animation is new for Thomas, but it makes perfect sense. The wall installation, based on her two-dimensional work, is both painting and video. On the lower portion of the wall is a landscape of large flat abstract planes in striking colors. Almost cartoony, they appear like hills or mountains, while the sky above shifts subtly through several dimensions.

Thomas is interested in pattern and abstraction and how we perceive them. But she is also interested in observation. The work in this exhibition is inspired by her drives through the Western Pennsylvania landscape. She explains in an email: "I break down the elements of the landscape into geometric forms and create colors from intuition and a desire to create a sense of depth." In her work, space is explored through both flatness and dimension. The pairing adds complexity.

Alongside the installation are three earlier prints from a series called "I'm an hour ahead of being more awesome than you." For these, Thomas plays off the perception of Pittsburgh as a dirty city, using screenprint and smoke to combine flatness and pattern.

Most intriguingly, Thomas manages to make something look both simple and complex. Her adroit use of color and pattern make her images at once winsome and edgy. Creating her flattened landscapes, she actually uses multiple plate etchings and screenprints. In her artist's statement, she says that printmaking's flexibility allows her to "build an image with a dozen or more layers in one piece." While recognizably landscapes, the images are studies of perception and abstraction. Ultimately, your eyes really are playing tricks on you.