From painting the Hall of Architecture purple to cataloguing the James Bond mythos, artists explore things that aren't quite what they seem 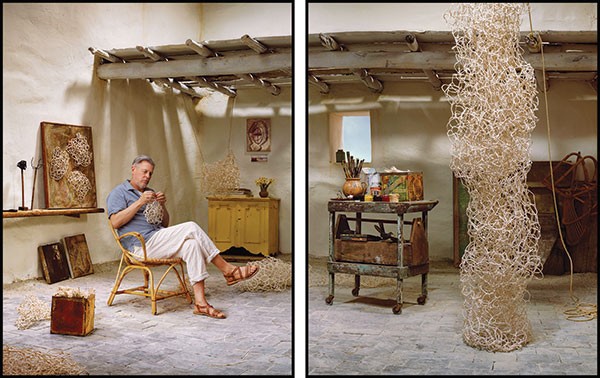 In their statement for the 2013 Carnegie International, curators Daniel Baumann, Dan Byers and Tina Kukielski touch on several themes that dictated their choices. However, one theme that became evident, while not directly stated, is that of artifice and impersonation.

At first glance, Gabriel Sierra's installation in the Hall of Architecture might seem to have "little effect" (to quote New York Times art critic Roberta Smith). But "Untitled (111.111.111 x 111.111.111 = 12345678987654321)" is more than mere intervention and appropriation. In the context of Pittsburgh, it functions both as indictment and praise for Andrew Carnegie, founder of both the Carnegie International and the museum that houses it.

As part of a major expansion of his original art-gallery concept, the Hall of Architecture allowed Carnegie to bring "antiquities" to the people of Western Pennsylvania. Made up of plaster-cast replicas of some of the world's most famous buildings, the Hall is an artificial grand tour. It is at once kitschy and rarefied, as it is now one of the few remaining intact examples left of this type of display. Sierra highlights the space and underscores its quirkiness, grandiosity and dysynchrony by accenting the walls in a rich, deep purple — a color with its own complex set of religious and historical associations.

Not far from Sierra's installation is another piece that interacts with aspects of its surroundings. "Untitled," by Wade Guyton, fills one wall of the Founder's Room and interjects its presence into the Gilded Age décor. Leaning against one wall, large-scale panels sport flames that rise from the floor. Guyton has made his reputation on artifice. His pieces seem to be paintings, but are in fact digitally rendered. Guyton has pioneered the use of scanners and inkjet printers to create a dynamic and unique abstract vocabulary. Another of his installations transforms a non-traditional space — it was previously the museum's coatroom — into a contemplative yet relaxed "gallery," complete with well-worn couches from his own studio.

While displayed in the traditional gallery space upstairs, a number of other artists share Guyton's innovative approach to abstraction. Sadie Benning, though primarily known for her video work, here offers surprisingly tactile, seemingly two-dimensional paintings. and-built with board and plaster, they are actually more like sculpture, and are based on drawings made on her smartphone. Benning is interested in the exchange between digital and analog processes. Similarly, Vincent Fecteau handcrafts his singularly odd sculptures in papier-mâché. The perplexity of the shapes, colors and materiality of his sculptures add to their allure. That interplay between solidity and ephemerality is also apparent in Lara Favaretto's nearby confetti cubes, which will gradually disintegrate with time.

While the above works could be categorized as material imposters, there are other works in the exhibition that focus on artifice as impersonation. In "The Pipe Cleaner Artist, Amalfi, '61," a two-panel light box, Rodney Graham assumes the character of an archetypal mid-century avant-garde European artist. The image itself is based on photographs of artists, one of Jean Cocteau and the other of Asger Jorn.

Like Graham, Taryn Simon conflates numerous references in her exhaustive installation "Birds of the West Indies." Compulsive to a fault, the piece presents the many layers of meaning contained in the James Bond brand. On one level, the work is a pictorial catalog of the women, weapons and vehicles that have appeared in Bond films. On another, it pays tribute to bird-watching and Ian Fleming's interest in it. (The spy novelist named his main character after an ornithologist.) Ultimately, the piece explores the nature of fantasy, and the surprising role that substitution has played in the Bond enterprise — particularly the role of Nikki van der Zyl, who provided the voice for more than a dozen Bond characters, most notably Ursula Andress in Dr. No.

In his two installations, "A Vivarium for George E. Ohr" and "Jean Dubuffet Typographer (diorama)," Pierre Leguillon presents another form of character study: the artist as self-promoter. The Dubuffet installation — consisting of a jumble of printed matter and a video — is actually placed in a case in the Museum of Natural History's Hall of Botany, where it feels both like a newly discovered specimen as well as a scientific interloper. Another piece placed for effect, as well as affect, is Mark Leckey's short film "Made in 'Eaven," found amidst the Carngie's jewel and mineral collections. Leckey has digitally reproduced a sparkling Jeff Koons stainless steel "Rabbit," itself a reproduction of an inflatable plastic toy bunny. Like Leguillon, Leckey here explores the real or fictive role of the artist as well as the arbitrary allure and value of objects.

While large group shows are rarely coherent, a loose thematic framework often invites welcome discovery amidst the multiplicity of experiences on offer.