Around the World in 80 Days

We end up rooting not just for Fogg to reach the end of his journey, but also for this company to do the same. 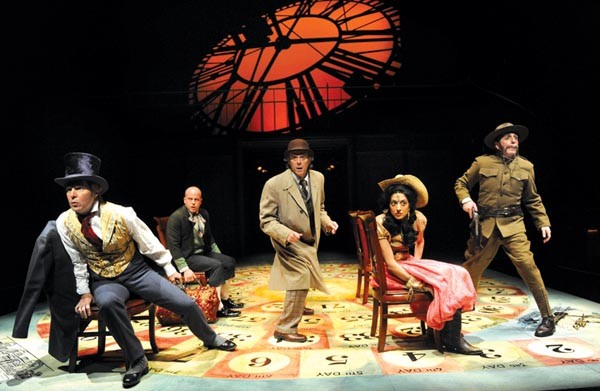 AROUND THE WORLD IN 80 DAYS

At first glance, a stage adaptation of Around the World in 80 Days might seem counterintuitive. This 1873 Jules Verne novel is regarded less as a hallmark of literature than as a cracking adventure story set in exotic locales — and unless you're Cameron Macintosh, exotic locales aren't readily recreated on stage. But playwright Mark Brown has done a very clever thing. In lieu of the far-flung, outsized fittings, he's substituted that old standby — Show Biz!

In the Pittsburgh Public Theater production, our hero, Phileas Fogg, and his servant, Passepartout, are played by two actors, and everyone else they meet in their bet to circumnavigate the globe in two-and-a-half months are played by only three other actors. So the show becomes a theatrical event where the manner in which the story is told is — possibly — more interesting than the story itself.

Five actors, two stairwells, five doors and four chairs are shuffled repeatedly to move us through Verne's tale. If you've seen The 39 Steps or The Mystery of Irma Vep, you have a pretty good idea of what you're in for. Though it's perhaps not as "meta-theater" as Irma Vep, what Brown has done is probably the best stage presentation this story could have. We end up rooting not just for Fogg to reach the end of his journey, but also for this company to do the same.

Director Marcia Milgrom Dodge has done a terrific job imbuing the production with drive and lots of high energy. If it drags in the second act, that's only because Brown — or possibly Verne — has overstuffed the story. Dodge, to her credit, almost overcomes that.

She's elicited several strong performances from the cast (though why everyone spends the first 30 minutes shouting their lines I didn't quite understand).

Ron Bohmer's turn as Fogg is so good you might miss how difficult is his task to make this unemotional, "veddy proper" Englishman enjoyable ... which he does. And Richard B. Watson plays his nine different characters with exquisite precision and exacting detail.