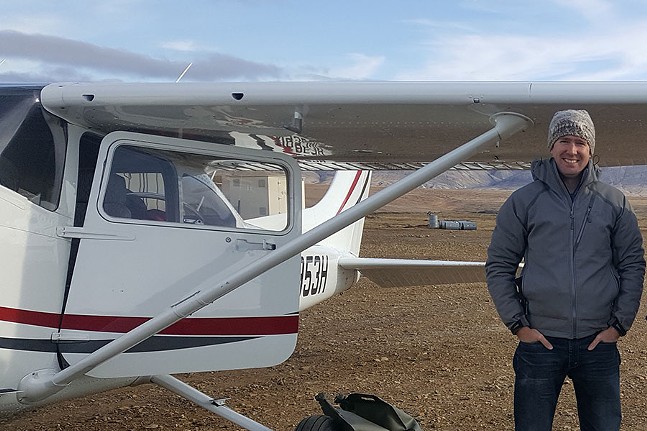 Ross Edmondson and his 1981 Cessna
When he's not putting out fires in oil fields, Ross Edmondson is flying 3,000 feet in the air in a 1981 Cessna, listening to podcasts. His day job is a project engineer for a natural gas company, working to extinguish flares burning off oil in fields in Iraq. But his free time is dedicated to flying.

On Mon., May 6, he'll depart the Zelienople airport in Beaver County for a six-month trip around the world. The long flights can be draining, stressful, and boring, hence the podcasts.


"I listen to a lot of TED talks," says Edmondson. "They’re very varied and pretty interesting. A lot of true crime right now as well, because that’s the sort of thing you don’t have to pay too much attention to, and it’s easy to listen to."

The idea for a trip around the world is obviously appealing for anyone with a pilot's license, but only around 200 people have ever done it in a single-engine aircraft like Edmondson's Cessna 182. The longest flight he's done in terms of time was in April 2019 in preparation for his round-the-world trip, a practice round from Hawaii to California that clocked in around 16 hours straight.


Edmondson chose Zelienople for his jumping-off point thanks to being stationed in the Pittsburgh area for four years. During that time, he joined the flying club, made friends, met a mechanic he liked, and figured he'd station his plane in Pennsylvania in the meantime.

That plane is a Cessna 182, a single engine, 270 horsepower, four-seat aircraft — two of the seats have been removed to make room for a 150-gallon gas tank — in which Edmondson can fly about 20 hours without refueling.

To date, Edmondson's longest is a flight from London to Cape Town, South Africa. This was a four-month trip with a British doctor which took Edmondson to 26 countries in Africa. That flight inspired the idea to use his around-the-world trip to raise money for the charity African Promise, founded by a childhood friend. It works to "improve the quality of education in rural Kenyan primary schools by ensuring that schools are equipped to deliver an education worth having." The charity raises money for primary schools in Kenya, providing books, materials, and school meals.