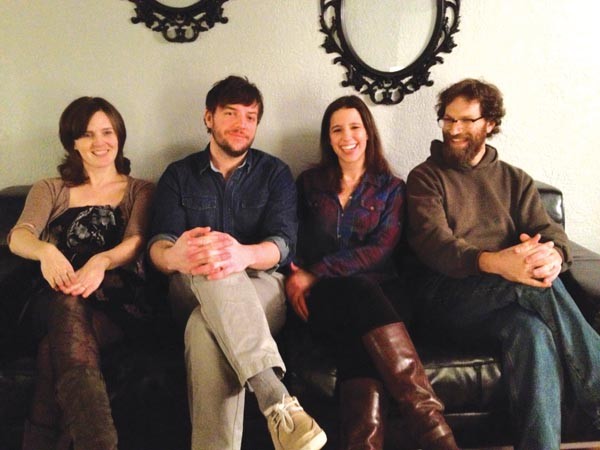 Half the members of folk-rock quartet Arlo Aldo, for example, recently became parents — which helps explain why they've taken their sweet time readying Zelie, their first album. They also report that they've been declining the tail end of multi-band shows.

"It's no fun to get in at 2 a.m. when I know my son will inevitably be up at 5," says frontman and principal songwriter David Manchester, whose son turns 2 next month. And with a 1-year-old of her own, bassist Susanna Meyer says she's getting more use out of her Crock-Pot to ensure a warm meal after rehearsals on what she's designated "band days."

Fatherhood has also changed Manchester's songwriting approach. He put his previous project, Kadman, in the category of "sadcore" — that mercilessly bleak and fragile subtype of alternative rock ruled by the self-destructive likes of Cat Power and Elliott Smith. But being a dad has cut into Manchester's moping time, and the crisp, mostly acoustic Zelie is at least as optimistic as, say, a '60s country record.

"I think that even though [the album is] down-tempo and mellow, it's not as wallowing and depressing," says Manchester, adding that "being a dad makes you keep track of the important things, even when you are sad." He wrote two songs in response to funerals: "Highway," after his grandmother's, and "Regrets," in reaction to a family friend's. "They're mortality-related, but they're also memory-related," says Manchester.

But family has long been a factor in his career. Manchester and his wife moved to Pittsburgh because it was a halfway point between their hometowns — his in Washington, D.C., and hers in Cleveland — and would only be a day-trip away from their extended families.

Starting anew in Pittsburgh's music scene, Manchester placed an ad on Craigslist seeking a female vocalist for the kind of male-female harmonies that define the band Low. This is how he connected with pianist Ariel Nieland. (In his emails, Manchester mentioned repeatedly that band practice would revolve around his wife and son; otherwise, he worried, specifying a female collaborator might "seem creepy.") Nieland knew drummer Brandon Forbes.

Parental and job responsibilities were only part of the reason Zelie took about a year to complete. "We didn't want it to be a one-listen album," says Forbes. "We wanted a lot going on there."

The album was recorded at J Bird Studio, the Cranberry home-cum-recording studio of Boca Chica guitarist J. Vega (who also connected Arlo Aldo with Meyer, his bandmate). The recording has a mellowness that hides its intricacy. On "Galileo," Vega recorded Nieland playing the same piano part on a Wurlitzer, a miniature toy keyboard and a real grand piano, and combined them for the twinkling that underlines the track. The shaking sound in "Ghosts of the Union Specific," meanwhile, is the collective noise of a maraca, an egg shaker and a box of brown rice.

Ultimately, band members say the grown-up responsibilities that limit their pace also help hold them together. "When you are in your 20s and are in bands, there is such an emphasis on making it and getting on a label," says Forbes. "It's easy to get into fights about who isn't taking it seriously. This works because we are all respectful of each other's lives."