Are you my mummy? Find out at Carnegie Science Center's upcoming Mummies of the World exhibit | Features | Pittsburgh | Pittsburgh City Paper 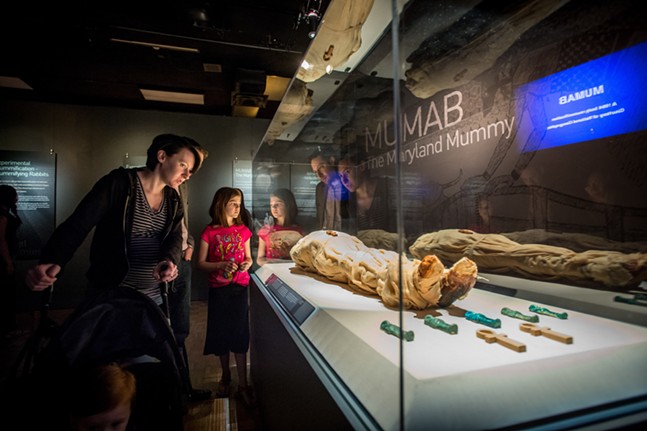 Mummies of the World, an upcoming exhibit at the Carnegie Science Center opening Sat., Oct. 5, will feature the largest exhibition of mummies (and "related artifacts") in the world. The show is an expanded version of an exhibit that originally appeared in Los Angeles in 2010.

Mummification is any process that preserves the body from decomposing, and the exhibit will feature several different kinds of mummies, including both natural and artificial mummification, as well as experimental mummification, like applying Egyptian techniques to a modern-day body. There will also be a gallery dedicated to the scientific and medical purposes of mummification.

Photo: Carnegie Science Center
A lizard mummy
The exhibit will highlight several "marquee mummies," including MUMAB, a mummy made by scientists in 1994; The Burns Collection, a group of Scottish mummies preserved by an anatomist in the 19th century; and the Orlovits Family of mummies, naturally preserved in 18th-century Hungary. While many of the mummies have been featured in previous exhibitions, some are open to public viewing for the first time.