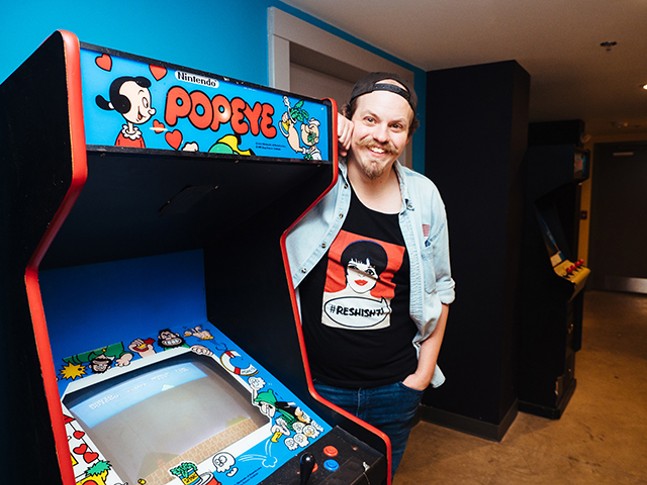 Comedy can feel exclusive. It's a medium where the loudest and most confident are often given the most visibility and others are left on the sidelines. It's a field that's been dominated by heterosexual white men for so long that's it's even become a joke among heterosexual white men. But June is Pride Month, and this year, it means a month's worth of Pride comedy shows at Arcade Comedy Theater, including queer-only standup and Golden Girls: Live.

Arcade will host Pride-related comedy shows every day for Pride weekend (June 6-9) and every Friday and Saturday for the rest of June.

"Pride doesn't exist in just a single weekend," says comedian Connor McCanlus, who stepped into the newly created Pride programming coordinator position at Arcade. McCanlus was brought on this year, because, in previous years at the theater, all the Pride events were stuffed into one weekend. "It doesn't feel like we're monetizing on Pride situations. It really feels like we're celebrating Pride."

There are 16 Pride comedy events throughout the month, ranging from improv to variety show to live podcast. McCanlus created some performances and helped facilitate others, but as a queer comedian, his running goal throughout the month's programming was to cast a wider net for those involved in both comedy and Pride celebrations, noting that even within the LGBTQ community, there are plenty of people who don't feel welcome in traditional Pride events.

"I think when we talk about how the scene can get better, a big part of it is the producers of shows need to do better," says McCanlus. "If I'm looking for people of color who do improv and I'm like, 'No one's coming to the jam,' that doesn't mean that they don't exist. It means that I don't know about them or they don't know about me. We just haven't met yet.”

One event, Donatella: A Queer Variety Show (June 8), features drag, improv, burlesque, and sketch. Pegasus: Improv Comedy (June 28), created and produced by McCanlus, features improv based on local queer history and centered around Pegasus Lounge, the landmark gay bar that was open for nearly 30 years before closing in 2009.

In addition to more scripted or planned shows, the programming includes loosely structured events, like LGBTQ*Bert: Queer Improv Jam (June 21), where queer performers of any age and experience level are invited to partake in free short and long-form improv jams. Anyone can see the show, but the stage is queer comedy only. "When queer people get to perform together, we perform in a different way, in the same way that whenever you're surrounded by what you feel is your community, you are different," says McCanlus. "It's a safe space for queer people who are interested in comedy to get started."

Part of building out the programming for Pride Month also means making LGBTQ performers feel like they can perform comedy anytime, not just during a designated month.

"We're setting up relationships for future shows because Pride also doesn't end in June. It's not like queer folk don't have a place at Arcade 11 months out of the year," says McCanlus.

The queer improv jam, for example, is an event McCanlus hopes will happen every few months and will help grow the scene. "I use the word ‘community’ a lot but I'm also aware that my idea of community is still only my world and there are so many people I don't know," he says. "I hope after this June I know a bunch more."