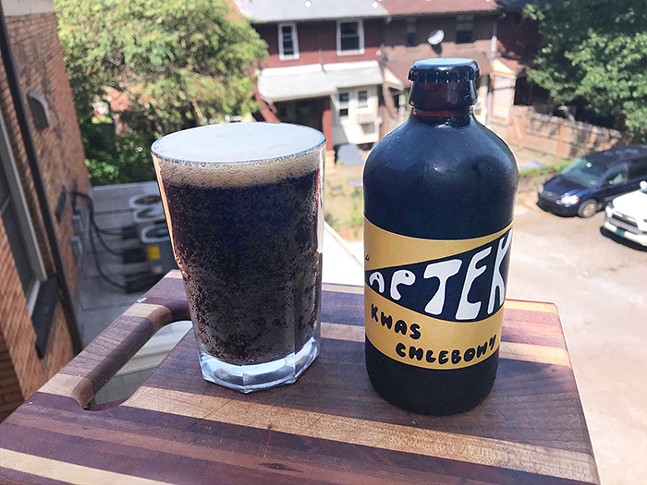 CP photo: Ryan Deto
Apteka's kwas chlebowy beverage
To many, beer can be a polarizing drink. The bready, bitter, hoppy flavors can be too much for some. Even though alcohol is extremely popular across the world, some avoid beer for this reason, and opt for wine, hard seltzer, cider, or other non-beer drinks.

With that in mind, one would think there would be little appetite for a drink that tastes similar to a robust beer, but isn’t actually alcoholic like beer. But they would be wrong.

Kvass is a non-alcoholic beverage made from fermented rye bread that is popular in Russia, Baltic countries, and several Eastern European nations. It’s carbonated, served cold, and can actually be quite refreshing.

Apteka, a Bloomfield restaurant that specializes in vegan Eastern European food, has begun making their own kvass and selling it out at their location. Apteka has not reopened for dining service, but has converted the space into a walk-up bottle shop and take-out restaurant, and they are selling natural wine, as well as bottled kvass.

I first had kvass while visiting Russia, and after a warm glass that wasn’t very pleasant, I learned to crave the cold, slightly bubbly beverage that quite literally tastes like liquid bread. It smells like beer, and tastes similar, but also distinctly different. There is almost no bitterness.

And Apetka’s version, which uses the Polish spelling kwas chlebowy, is made from the restaurant’s naturally leavened organic dark rye bread, fermented with yeast and carbonated. It’s delicious and smooth, with enough bubbles to make it refreshing even on a hot day. The kvass is packed with dark rye flavor, that is not too smoky, and very slightly sweet.

According to Apteka’s Instagram account, the owners learned to depend on it during a heat wave in Ukraine and they call it a real treat. Apteka reminds customers to keep it chilled. The beverage is very effervescent, and keeping it cold, helps it not foam over upon opening. (Even with a chilled bottle, expect some foam after opening and try to pour in a glass right away.)

Apteka’s kwas chlebowy can be purchased at the restaurant, which is located at 4606 Penn Ave. in Bloomfield. Bottle shop hours are Wed.-Thu. From 2-7 p.m. Bottle shop and food hours are Fri.-Sat. 4-8 p.m. The restaurant takes pre-orders online.