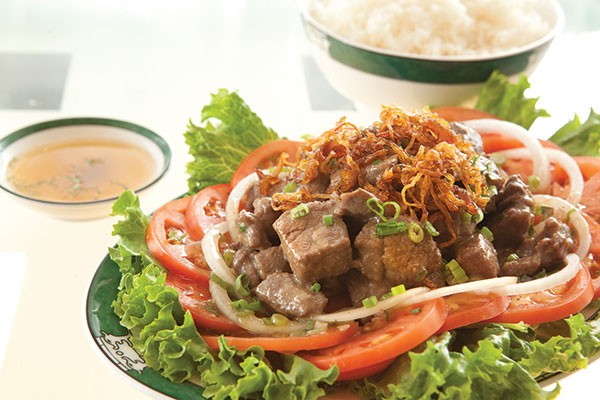 Before it gained its reputation as Party Central, East Carson Street was renowned for its historic architecture and for the wide variety of businesses — from butcher shops to used book stores — that kept those old storefronts in service to generations of South Siders. Today, the proliferation of bars, restaurants and boutiques has homogenized the retail scene, but the architecture is as interesting as ever. And few businesses showcase their tin-ceilinged interiors better than Apsara, the neighborhood's newest Southeast Asian restaurant.

The latest offering from the family behind Downtown's now-shuttered Lemon Grass Cafe and Oakwood's Angkor, Apsara offers primarily Cambodian food alongside Thai and a limited Chinese selection. The dining room's ambience is elegant, with pistachio-green walls rising up a story-and-a-half to a white pressed-tin ceiling. The tables boast white cloth tablecloths and fresh flower arrangements. Although only a couple of large, almost photorealistic paintings of classical Cambodian dance poses hang on the walls, high shelves display silver statuary and a collection of elephant figurines. Where most ethnic restaurants tend toward extremes of either bazaar-bought kitsch or stark simplicity, Apsara struck a perfect balance.

The menu is balanced as well, with nearly equal parts unfamiliar dishes, familiar ones and ones that are, perhaps, even a bit over-familiar. We started our meal with something from each category, respectively: na-taings (Cambodian puffed rice squares), short ribs and calamari. We were most intrigued by the calamari's sauce, which promised a blend of black pepper and lemon. Our first taste was dull, but once we gave it a swirl to distribute the finely ground pepper, it became vibrant and the highlight of the dish, which otherwise consisted of slightly chewy squid rings in a puffy tempura-style batter.

Na-taings were fresher and crispier relatives of American rice cakes, served with ground beef or pork in a thick, deep-brown sauce that was richly flavored with coconut milk, roasted shallots, garlic and peanut. It was so good, we found ourselves loading up the squares with as much sauce as they could bear. The short ribs were similarly addictive: glazed with a savory, slightly sweet sauce and tossed with pickled papaya, ginger and garlic.

Individual vegetables — chive flowers, Japanese eggplant, green beans — serve as the foundation ingredients for the entrees, to which diners add their choice of meat, shrimp or tofu. The dish that caught our attention promised a broad medley of vegetables in "an Apsara creation: a unique lemongrass sauce." Sadly, it didn't live up to its promise. While the chicken consisted of thin, broad slices of tender white meat that held the sauce well, the sauce itself was muddy-tasting, as if too many spices had been thrown together without enough time to bloom and meld. Additionally, the mix of vegetables suggested a kitchen-sink approach to a stir-fry, rather than a curated dish.

Jason was much more pleased with saramann, cubes of chuck slow-simmered in a thick coconut-milk sauce that was warmly spiced with star anise, cloves and cinnamon. Angelique wished for some sour or spice notes to offset the sweetness, but Jason's only complaint was that the dish could have used a vegetable. Something green and crisp would have added contrast, or else something tender and earthy would have rounded the dish out.

If the mussels are an indication of the quality of the menu's seafood section, then Apsara's way with seafood is very, very good. A generous pile of shellfish — their top shells removed to reveal individual, iridescent bowls — was served in a light oyster broth. Each mussel was individually garnished with a wilted basil leaf, a sprinkling of hot red-pepper flakes and a matchstick or two of sautéed ginger root.

If the overall retail mix on East Carson Street has become narrower, at least its restaurant scene is constantly expanding. Apsara brings Cambodian, beautifully, to the table.