Anvil: The Story of Anvil 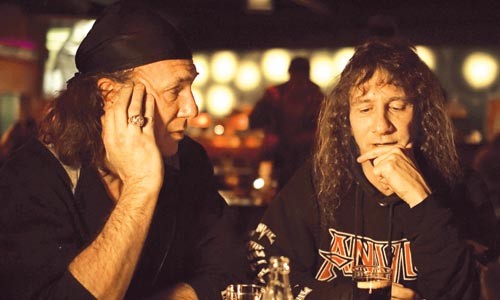 I'd heard there was a great film kicking around the festivals and bigger cities about a Canadian heavy-metal band that toils in obscurity for decades -- a documentary with the deadpan title of Anvil! The Story of Anvil. I filed it away under hope-to-see, but when earlier this spring, a friend told me this movie made her cry, I bumped it up to must-see.

Now that I've seen it, I'm recommending you do, too. But the film is so full of little surprises, funny moments, kooky twists and unexpected poignancy, I hate to say too much. But here's what you need to know, prefaced by no-joke Anvil LP titles.

Forged in Fire: Anvil was formed in late 1970s by Toronto teen-agers. They combined their adolescent love of dirty jokes with some pretty heavy tuneage inspired by the New Wave of British Heavy Metal. Except they played louder, faster, harder and funnier.

The band's second album, Metal on Metal, released in 1982, put Anvil on the path to success. The film opens with footage of the group semi-seriously rockin' the crowd at a Japanese metal festival in 1984. (The sound is serious; the outfits and shtick intentionally hilarious.) But stardom never knocked.

Speed of Sound: Yet, Anvil won over both heavy music's godfathers and the gods to come: Contemporary interviews feature Lemmy, Lars and Slash heralding Anvil's impact, particularly its early thrash sound and innovative drum work. The band also made a fan of a British teen-ager named Sacha Gervasi, who joined the '84 Canadian tour as a roadie. Much, much later, Gervasi -- who grew up to be a screenwriter (The Terminal) -- made this movie.

Pound for Pound: Gervasi's cameras follow the group for the better part of a year -- through a disastrous tour of Europe and a new album (its 13th, titled This Is Thirteen). Obviously, his earlier relationship with Anvil nets him easy access -- not only to the day-to-day life of the band (and their families), but also the members' confidences. Lips, particularly, is remarkably guileless discussing the band's enduring frustrations and plaintive hopes.

Absolutely No Alternative: Comparisons to Spinal Tap, the fictional metal band from the 1984 film, are inevitable. The real-life events that befall Anvil are just too similar (blind enthusiasm despite dwindling success; bizarre girlfriend/manager; tour mishaps) -- particularly when combined with the band's penchant for writing songs like the vaguely pornographic "Toe Jam" or "Thumb Hang," inspired by a high school lesson on the Spanish Inquisition.

The Anvil lads never openly acknowledge the resemblance; it's probably not much fun being compared to a made-up band after being deadly serious for decades. (Yet while wandering through the catacombs of a nightclub, one member can't help singing out, "Hello, Cleveland!")

When misfortune thwarted Spinal Tap, we laughed because it was only a movie and these guys were obviously be-wigged caricatures, free to be wealthy, popular entertainers in their real lives. But when things go wrong for the guys in Anvil -- who are not just real, but earnest -- your heart truly breaks a little.

Back to Basics: Why Anvil never caught on, how this metal powerhouse that was a blast on stage missed the massive heavy-music boom of the '80s, is still the dominant puzzle for Lips, Reiner and armchair metallurgists. Was it that they were slightly off the map in Canada? The lousy label? The ascension of other signature metal bands that sucked up all the light? Today, Lips surmises: "In one ... two ... three words ... we haven't got good management."

Worth the Weight: Yet Lips and Reiner are notably free from any sense of entitlement. Their conviction that their big break is just around the corner and will come from their unending pursuit and faith is refreshing. There's nothing unique about a band -- even a great band -- that never makes it; that's 99.9 percent of the stories in rock 'n' roll. What is special is the rare group that truly never gives up, whose members transcend apathy, bitterness, disappointment, boredom and even current trends in music to keep plugging away. A lot of people claim to "rock on," but these guys really do.