Pittsburgh Irish & Classical Theatre's production of Antony and Cleopatra could well be subtitled Age and Guile Beat Youth, Innocence, and a Bad Haircut. (While I don't usually put P.J. O'Rourke and Shakespeare into the same thought, I do need to credit the modern satirist's 1995 book title.) Octavius, that whelp of a Caesar, is more cocky than innocent, but the message holds: Age rocks.

Yes, there's an historically based plot driving A&C, but with director James Christy the real attractions are sex, violence, betrayal and more sex. The testosterone level is barely contained as Antony and his men stride (never merely walk) across the stage. Female pulchritude goes off the charts when Cleopatra and entourage undulate onto the scene. And, yes, these sensual, passionate and powerful people are undeniably of middle age. It helps that Christy has chucked the usual togas for a semi-modern compromise. Jen Sturm's costumes add the Roman military sashes and such atop a more flattering shirt-trousers look. More colorful, flowing fabrics adorn the women, with special sumptuousness for Cleo.

Christy's casting is superb, and I can't help but wonder whether it's deliberate that the Greek Ptolemy queen is portrayed by an Italian American, and the Roman (Italian) hero by an actor of unabashedly grizzled Greek heritage. Sam Tsoutsouvas embodies the "old lion" that is Antony: fierce and virile yet aware of his diminishing strength. Helena Ruoti, still as beautiful as when she began with the original City Players, admits a haggard look and tears into the raw agony of grief. Their Antony and Cleopatra are people who lived fully and died majestically.

There is much to applaud: Leo Marks as the callow Octavius; Bria Walker as clever and faithful Charmian; James Sutorius as the conflicted Enobarbus; Shammen McCune quite unworldly as the Soothsayer; and Ken Bolden's multi-faceted Mardian. And another hand for David P. Gordon's minimalist scene design of semi-ruined wall slabs, one with worn-down Latin carvings, the other with faded hieroglyphics, moodily enhanced by lighting and sound design, Cindy Limauro and David Huber, respectively. 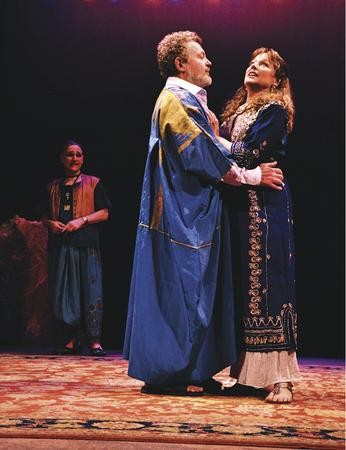