UPDATE: Anti-union activity is heating up ahead of Google contractor's vote to unionize 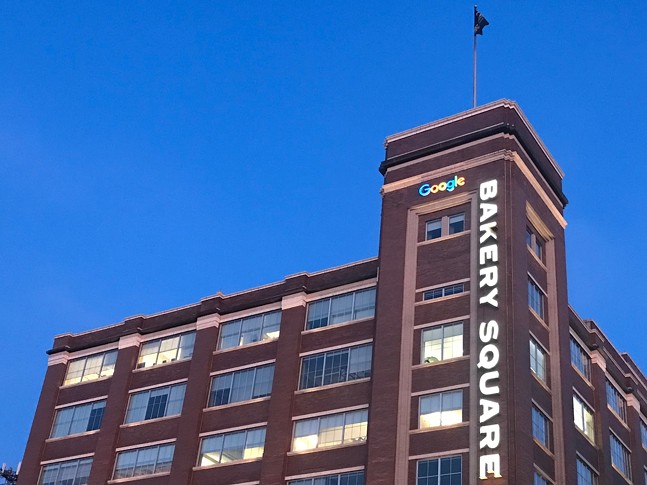 CP photo: Ryan Deto
Google offices in Larimer
Last month, more than 66 percent of Google tech contractors signed cards to hold a vote on whether to create a labor union at HCL Technologies, the contracting firm that works with Google’s offices in Pittsburgh.

This is a fairly impressive feat considering the tech industry has virtually no labor unions. But with the union vote of HCL’s 90 employees set for Tue., Sept. 24, it’s still unclear which way the tech workers will vote, seeing as there are significant anti-union efforts up against them.

HCL workers are organizing with United Steelworkers (USW) and on Sept. 16, USW claimed in a press release that HCL was “coercing employees into mandatory meetings aimed at defeating the workers' campaign to organize a union.”

USW is critical of HCL for enlisting Eric Vanetti of Vantage Point Alliance, an anti-union consulting firm who gained notoriety for its role in defeating union efforts at a glass factory in Ohio. This effort was featured in the documentary film American Factory.

USW International President Tom Conway also condemned HCL for holding “captive audience” meetings with employees, where managers will attempt to persuade them to vote against the union without a union advocate present.

In a statement given to WESA on Sept. 23, HCL disputed this.

"We respect our [employees'] legal right to decide whether or not they want to be represented by a union and are dedicated to fostering an inclusive and open office culture for all of our team members at HCL," read the statement.

Renata Nelson, an HCL contractor and union organizer, agrees HCL is going far in its anti-union efforts. Nelson, who has worked for HCL for the past three years, says when workers would normally bring up concerns with management, they would be brushed aside or HCL would offer team-building activities or perks that are already available to them because they work inside the Google office building in Bakery Square.

But since HCL employees successfully got enough signed union cards to secure a vote, Nelson says HCL managers have been much more active in communicating with workers, including receiving daily emails, sharing anti-union information, and having a consultant available to meet with workers if they want to ask about unions. She says this is a far cry from the attention HCL managers paid to Pittsburgh before the union cards were signed, when the project manager would usually only be on-site once a year.

Nelson also says that HCL managers and the consultants have been one-sided in the information they provide to workers.

“These emails often have the subject ‘Question and Answer,’ though I’ve never been offered a chance to pose any questions to him,” says Nelson. “We’re eager to know all the facts, and we are critical of information from the company that cherry-picks quotes and provides incomplete information.”

She wants to form a union to increase workers' say in how things are run at HCL and the work they do for Google. Nelson says her concerns are often heard by on-site HCL managers, but they rarely make their way up to the upper-tier managers at HCL. “It is unclear how to gain access to people who have decision-making power,” says Nelson. She is also dismayed at the wide ranges of salaries HCL workers take home, even when doing similar work.

HCL employee and union organizer Ben Gwin says HCL workers make between $30,000-60,000 a year, and it varies widely. According to Glassdoor, a site that collected salary information from 73 people, Google software engineers in Pittsburgh earn on average $121,000 a year, ranging from $88,000-171,000 a year.


As HCL employees who work at Google like Johanne prepare to vote to join us Tuesday, they're sharing their stories of why unions are needed in the tech industry. RT to wish them luck! #1u #USWUnity pic.twitter.com/bZYt0RaKcf

Steve Gyrgo has worked with HCL for two years. He says he is not against unions as a whole, but he is worried that after forming a union, Google might want to work with another contracting firm.

HCL itself would be violating the National Labor Relations Board law if the company fired workers for forming a union, but Gyrgo is concerned the union can’t protect them from the work they do with Google, since they don’t actually work for Google.

According to the New York Times, as of March, there were more contractor workers doing work for Google than direct employees themselves. Even though contract workers can often feel like they are working for large companies like Google, they technically don’t.

Gyrgo says he is more comfortable with letting the courts and legislatures work on issues concerning contract workers than vote for the union.

“With contractors, there is a push in the courts, state legislatures, maybe that is the way to move forward,” says Gyrgo. “But I am not willing to vote for this.”

President Donald Trump has seated a record number of federal judges, most of them linked to conservative organizations that are anti-union. The Pennsylvania state legislature is currently controlled by Republicans who have passed several anti-union bills.

Sarah Wilson has been at HCL for five years and is also opposed to the union. She doesn’t think there has been enough time for workers to educate themselves on what a union would mean for them.

But, Nelson says information has been spreading among co-workers, especially anti-union messaging. She says these messages were sent from co-workers who were against the union and sent to personal emails. These were in addition to the HCL managers' emails that were sent to employees' work emails.

“There is a small group of my coworkers who have put their names on a series of anti-union emails that were sent to the personal email addresses of the vast majority of my coworkers despite them not having provided their personal information to these people,” says Nelson.

Wilson says that the only emails workers have received were directly from HCL management to work emails.

However, an HCL employee who asked to remain anonymous out of fear of reprisal from other employees, shared with City Paper a screenshot of an email urging employees to vote against the union rhetoric that was signed by 16 HCL employees, including Grygo and Wilson. (City Paper confirmed the names on the email, and has since blocked them out.) The email included personal anecdotes on why people were against unionization.

“A vote ‘no’ at worst would provide more time for us to research and educate ourselves before contracting with a union,” reads the email sent on Sept. 17. “This is a major event that will forever change our relationship with HCL management and, by extension, Google.” 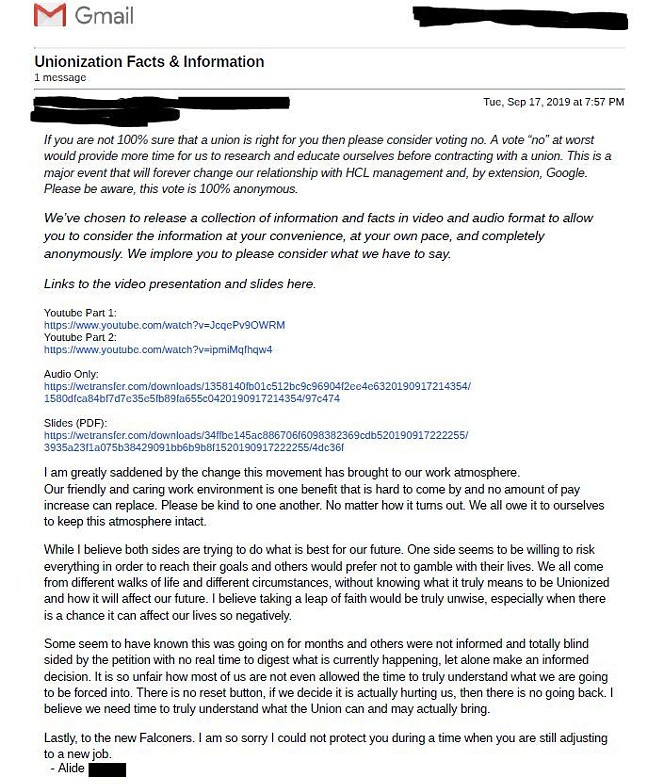 But Pittsburgh-based labor attorney and Century Foundation fellow Moshe Marvit says this isn’t quite an accurate assessment of the union voting process. Section 9(c)(3) of the NLRB Act states that another union vote can be held 12 months after a valid union election, either to form a union or against a union. Even if a union is formed, the union can also vote to decertify itself 12 months after forming.

The email apparently doesn’t offer this timeline or information about how unions can decertify. In fact, in a presentation attached to the email, there is wording that reads, “There is no changing your mind” and “There is no deciding it’s not working and just disengage or walk away.” Marvit says the email is misleading.

“The truth is they can vote for a union, and then in a year they could decertify,” says Marvit.

He also says voting against the union would give HCL management a year to continue their anti-union push, possibly solidifying their opposition against forming a union.

“The reason is not true that it ‘just gives you more time to research,’” says Marvit. “Now the employer has a year to union bust.”

In the end, Gwin says there has been a lot of anti-union messaging, and that most of it is what he expected.

“It is all basic anti-union talking points,” says Gwin. “A bunch of veiled threats.”

He says the goal of the union is to negotiate salaries for everyone and to provide more fairness in salary discrepancies.

“We just want a voice in the process,” says Gwin. “And to be able to negotiate our own contract and have a more equitable workforce for everyone.”