After the Tree of Life shooter was allegedly motivated by anti-immigrant hate, some are calling out the Colcom Foundation for anti-immigrant funding. 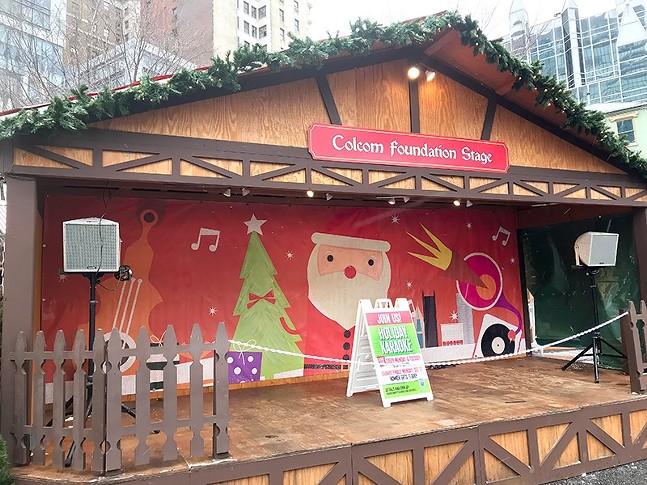 But the foundation's central cause is more controversial than that: Colcom Foundation gives millions to anti-immigrant groups; the same groups that spread anti-immigrant rhetoric similar to what alleged Tree of Life shooter Robert Bowers espoused before carrying out the mass shooting last month.

And now some advocates are calling out Colcom's sponsorship, particularly at public and popular locales.

The Colcom Foundation’s name is currently plastered on the stage at Market Square’s Peoples Gas Holiday Market. The foundation has donated the majority of its multi-millions in funds to anti-immigrant groups, many of which frame immigration to the U.S. as an "invasion." Bowers called immigrants from Central America “invaders.”

According to tax forms, the Colcom Foundation gave $19 million to anti-immigrant groups in 2016, mostly to three large organizations: Federation for American Immigration Reform (FAIR), Center for Immigration Studies, and Numbers USA. Anti-immigrant groups received 58 percent of Colcom’s funding in 2016. And those groups are still listed as beneficiaries on Colcom’s website for 2018 giving.

Monica Ruiz works with immigrant-support group Casa San Jose in Brookline. She says Colcom's prominent sponsorship is "absolutely terrible." She is dismayed that an anti-immigrant sponsor was given prominent placement in the holiday market.

"Did they forget that Jesus was an immigrant? It’s Christmas," says Ruiz. "This is not the type of message to send to the city."

Ruiz says websites like FAIR and Numbers USA are often used by immigration restrictionists to defend anti-immigrant proposals, even though those sources are known to skew facts and misrepresent data. "They just fuel this right-wing agenda they have that [says] immigrants are bad," said Ruiz.

The Southern Poverty Law Center told the Post-Gazette in 2015 that if Colcom wasn't funding anti-immigrant groups, the anti-immigrant movement might not exist.

The Pittsburgh Downtown Partnership (PDP), who organizes the holiday market, issued a statement to City Paper in response to this story, but didn't detail any changes in policy concerning the Colcom Foundation. PDP spokesperson Leigh White said the Holiday Market provides for local businesses, makers, artisans and "an increasingly diverse array of global merchants."

"The Pittsburgh Downtown Partnership’s mission is to cultivate a vital Downtown neighborhood, as a key component of our City and Region’s development," White said in a statement. "Our efforts are made possible in large part by the support of the philanthropic and corporate community, as well as collaborations with cultural, community, and municipal partners from throughout the region. Colcom Foundation has supported numerous PDP initiatives, including as a founding sponsor of the Holiday Market."

If "Pittsburgh is stronger than hate," anyone else think it's weird that Santa's house in our downtown Christmas market is sponsored by Colcom, which in 2016 alone gave $19 million to anti-immigrant groups, including $9M to @splcenter-designated hate groups FAIR and CIS? pic.twitter.com/Kk97W6vTxv


The Pittsburgh chapter of the Democratic Socialist of America is condemning the Colcom Foundation and its sponsorship of holiday festivities.

“Pittsburghers who are appalled by family separations, neo-fascist [U.S. immigration official] raids, and gas cans being shot at asylum seekers also should be appalled by the Colcom Foundation,” wrote Pittsburgh DSA in a statement. “Colcom channeling tens of millions toward creating the national anti-immigration movement demonstrates the absolute lack of humanity at the heart of this capitalist charity. Pittsburgh DSA stands in solidarity with immigrants and welcomes all to our communities. And Colcom sponsorship of Downtown festivities is nothing if not unwelcoming.”

The Colcom Foundation did not return a request for comment on this story.

FAIR and CIS have been labeled hate groups by the Southern Poverty Law Center. FAIR was founded in the 1970s by John Tanton, a white nationalist. In 1993, Tanton wrote “I've come to the point of view that for European-American society and culture to persist requires a European-American majority, and a clear one at that." Tanton also played a role in initial funding for CIS, which formed in 1986. Immigration-restriction group NumbersUSA, has not been designated a hate group by SPLC, but the organization has several ties to Tanton, who mentored NumbersUSA's director.

FAIR has lobbied state legislatures to implement hard-line immigration laws, including an Arizona law championed by former Maricopa County Sheriff Joe Arpaio, who was convicted of contempt of court when he refused to stop racially profiling Latinos.

The group also backed Hazleton, Pa.’s ordinance to bar landlords from renting to undocumented immigrants. That law was passed by U.S. Rep. Lou Barletta (R-Hazleton) when he was Hazleton mayor. The Hazleton law was eventually ruled unconstitutional.

Colcom has a significant presence in Pittsburgh. Known for advocating for environmental causes, including the controversial topic of population control, Colcom’s name is also ingrained in the walkway to the Frick Environmental Center at Frick Park. 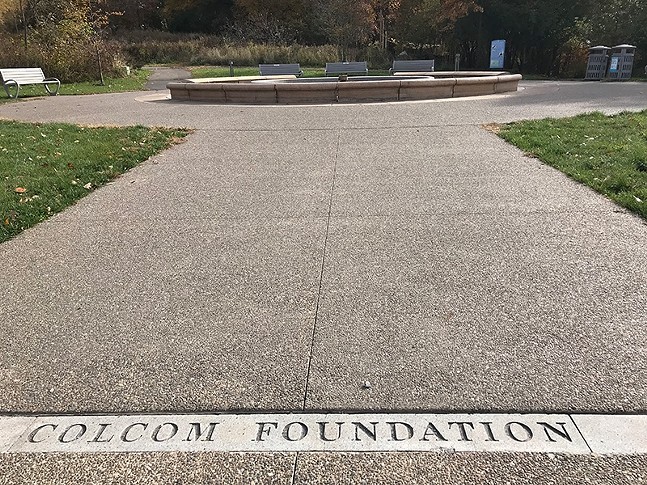 CP photo: Ryan Deto
Frick Environmental Center
Arguments against overpopulation are often used by immigration restrictionists like FAIR as a way to persuade people to their cause. As news site Vox pointed out in April, overpopulation is not a huge issue in the U.S., as its population of 325 million could easily feed 400 million at the current level of agricultural production. Additionally, the U.S. has a number of very large states with very few people. If the U.S. was populated as densely as Europe, the country's population would be around a billion.

Colcom's mission statement reads: "The primary mission of Colcom Foundation is to foster a sustainable environment to ensure quality of life for all Americans by addressing major causes and consequences of overpopulation and its adverse effects on natural resources."

Editor's note: The original version of this article erroneously stated that NumbersUSA was designated a hate group by the Southern Poverty Law Center. The story has been updated to better reflect NumbersUSA's role in anti-immigration advocacy. Article also originally misstated that John Tanton formed Center for Immigration Studies. He helped with initial funding, but did not found the group.