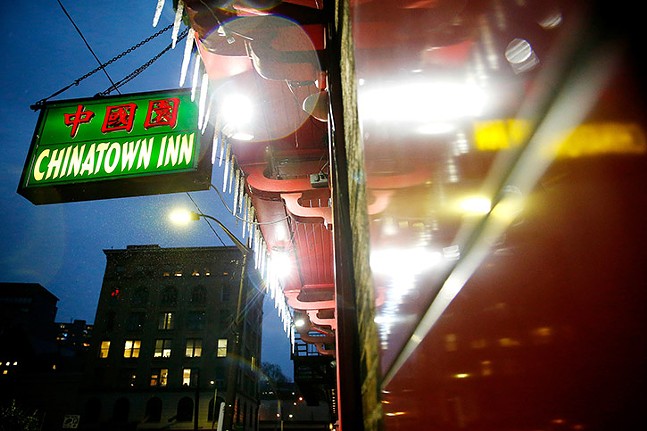 CP photo: Jared Wickerham
Chinatown Inn on Third Avenue in Downtown Pittsburgh, the location of the city's "lost" Chinatown
Pittsburgh’s Chinatown was something I only heard about when talking to other young Asian Americans in the city. It was folkloric, despite being a part of Pittsburgh’s history and, by virtue of being Asian American in Pittsburgh, our history. When I was Downtown, I sometimes caught a glimpse of the facade of what I would later learn was Chinatown Inn, but as a transplant to the city with a questionable sense of direction, I was never able to find it again.

When I found out a local organization was recently hosting a virtual event about Pittsburgh’s “lost” Chinatown, I was ecstatic. Attending the event, however, left me frustrated with the presenter’s misrepresentations of Chinese American history and the consistent othering and exoticizing of Chinese people. As violent anti-Asian hate crimes are on the rise, the presentation felt not just irresponsible but harmful as part of a larger, systemic problem in how authority offered by educational contexts perpetuates the dehumanization of marginalized groups.

There was a 1900% rise in anti-Asian racism in 2020, according to NYPD data. In the past month alone, elders from our community have been slashed across the face, robbed at gunpoint, shoved to the ground, and killed. On Feb. 22, the Pennsylvania Governor’s Advisory Commission on Asian Pacific American Affairs released a statement condemning the recent violence. It asks Pennsylvanians to stand up against the anti-Asian hate and racism and cites “threats of bodily harm to Asian American high school students and the casual use of the term ‘COVID’ to name Asian-influenced food” as examples of anti-Asian racism.

While it’s useful to note these instances, especially when influential figures such as former President Donald Trump spread such rhetoric, it’s also worth examining what lays the groundwork for these hate crimes to occur. Inflammatory rhetoric works best when it compounds already existing miseducation, and those in positions to educate and inform — academics, teachers, museum curators, and journalists, to name a few — are responsible for the ways many people learn about the histories and cultures of non-white people. Often, the people who are given this authority are white.

Whiteness, in itself, is not damning, but it does influence people’s biases, how they frame the things they teach, and how they position themselves relative to the topics and people they talk about. White educators can cause harm by their actions if they’re not critically engaging with their own biases, causing even those with sincere intentions to marginalize a group or miseducate their students.

It is, of course, accurate that white 19th-century Americans thought of Chinese people that way. According to Erika Lee’s The Making of Asian America, Chinese laborers were hired for jobs “too dirty, dangerous, or degrading for white men … [and were] paid on a separate and lower wage scale from whites,” and the dehumanizing attitudes that the presenter listed were used to justify that treatment.

Hearing middle school taunts, even hearing anti-Asian slurs, is something I’ve unfortunately become accustomed to. I’ve heard that Chinese people are inherently, perpetually foreign to the United States my entire life. Even my white, adopted father has called me “yellow.” But in an educational environment, repeating these dehumanizing phrases without critique or context helps normalize these ways of thinking and talking about Chinese people in the present day.

Educational contexts give those presenting information authority and ask the audience to trust them that the information presented is correct.

In addition to normalizing dehumanizing patterns of thought, educators should also be cognizant of the context and accuracy of the information they share. During the Q&A, the presenter also noted that Chinese people “sometimes used our own courts against us to win civil rights for themselves.” Not only does this assume a white audience, it ignores the long history of Asian people attempting to use U.S. courts to gain rights and avoid injustices, only to be struck down.

The 1889 Chae Chan Ping vs. United States case is one of the earliest examples in which the government strengthened its authority to regulate immigration based on racial biases. The case was in response to the Scott Act of 1888, an addendum to the 1882 Chinese Exclusion Act, which prohibited immigration from Chinese laborers.

Framing the U.S. justice system solely as a means of gaining rights is a careless inaccuracy at best and harmful revisionism at worst. Framing the courts as “ours,” as owned and made for the benefit of white people (“us”), also furthers the us vs. them othering and dehumanization of non-white people.

Educational contexts give those presenting information authority and ask the audience to trust them that the information presented is correct and properly contextualized. People should not have to, and do not have the time to, fact-check every class or informational event they attend. Given this responsibility of educators, it’s worth asking what the dangers of an oversimplified, overly sanitized narrative are, as well as who benefits.

Certainly, it is easier for white presenters to not worry about these contexts and historical contradictions. It is also easier for white audiences to hear, since it allows them to learn about “the other” without reckoning with the violence — both systemic and individual — white people have enacted upon non-white people. Everyone, of course, has biases, but the biases that come from being white in the United States allow white people to ignore colonial and imperial violence, to oversimplify others’ histories and think it is sufficient, and to reinforce and perpetuate the idea that non-white people are “weird” and “other.”

Meanwhile, such oversimplifications deny Chinese and other Asian people our own history, making it difficult to understand where current animosity and racism come from. This, in turn, makes it harder to respond in ways that will move our communities forward and keep us safe.

Understanding the history of anti-Asian racism as one of dissonant disdain for us as unassimilable cheap labor and as an economic threat, of one in which the model minority myth exists as an anti-Black, anti-Latinx tool by white systems to divide non-white communities, is how we understand where we are situated today. It’s how we understand that our place in America has always been tenuous and conditional based on what can be put to the service of white people.

Oversimplifying our history makes it harder to understand why this is happening, and without the historical context, it becomes more difficult to understand racism against other non-white communities. Instead, it becomes easier for Asians to turn on other marginalized groups, particularly Black people.

When white people choose to make themselves authorities on non-white people, cultures, and histories, no matter how well meaning they are, they need to confront their own biases and consider the potential harm their framing might impose on marginalized people.

This can come in the form of retributive individual vigilantism or calls for increased policing, neither of which will solve the historical root cause: white people believing that this country was made solely for the benefit of white people. Individuals’ vigilantism will not change anything systemically, and increased policing will further harm non-white communities, especially Black communities, according to a 2018 study by the American Public Health Association.

Instead, engaging with local Asian organizations whose explicit purpose is to teach, educate, and share Asian American cultures and histories can help people better understand why anti-Asian racism is occurring today as well as broaden and deepen one’s understanding of contemporary Asians beyond stereotypes. While it’s difficult during a pandemic, getting in touch with your community, particularly leaders from the communities most affected, to better understand your neighbors’ concerns and needs, and to come up with collective alternatives to increased policing can also reduce the risk of Black people being subjected to police violence.

Talking about and teaching history always comes with a weight of responsibility. Had a Chinese or Asian person been the presenter in the lecture I attended, they would not have been exempt from that. But when white people choose to make themselves authorities on non-white people, cultures, and histories, no matter how well meaning they are, they need to confront their own biases and consider the potential harm their framing might impose on marginalized people.

It would be disingenuous to suggest that white educators’ microaggressions are synonymous with the physical violence enacted on Asians in the last month. But people do not wake up as a blank slate and choose to commit a racist hate crime. Those actions need to be primed with the slow chipping away of a person’s humanity, and the othering and exoticizing that uncritical, biased educators perpetuate helps lay that foundation.