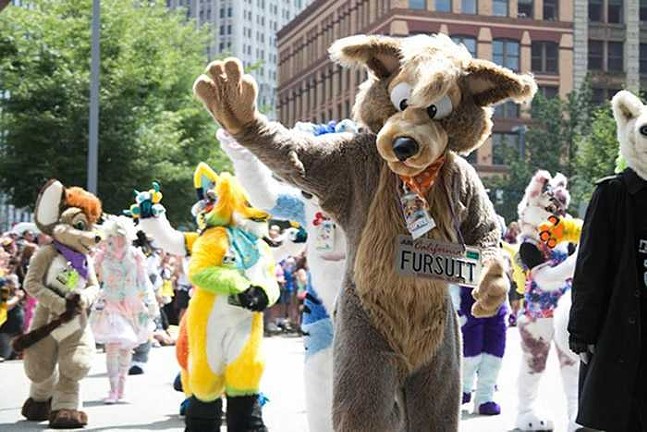 In addition to canceling this year's convention, Anthrocon is also postponing its student art competition until 2021.

"Due to a recent turn of events, the Anthrocon Board of Directors has decided to cancel this year's convention," says Anthrocon public outreach director, John "KP" Cole, in an email. "We are very disappointed, but the safety of our attendees, staff, vendors, and our friends in Pittsburgh is paramount. We will be returning to Pittsburgh in 2021."


It's with a heavy heart that we have to announce that we're cancelling AC 2020. Without an end in sight for the COVID-19 crisis it's not safe or responsible of us to hold the con.

All the info we have is at this link. https://t.co/0JX0Yeb3sb pic.twitter.com/lySqKI2kee


More information on refunds, reservations, and alternatives can be found here.

Read our earlier story on how the organization had planned to handle COVID-19 restrictions below:

The COVID-19 outbreak has canceled or suspended sports, big festivals, and other favorite pastimes in Pittsburgh. However, it has yet to claim one of the city's most unique celebrations – Anthrocon, an annual convention for people who dress up as, write about, and produce art of anthropomorphic characters, aka furries.

Anthrocon previously posted an update on its website and Facebook page outlining the lead-up to the 2020 convention, which is expected to take place from July 2-5 at its usual venue, the David L. Lawrence Convention Center in Downtown. The update states that “At this time, all of our contracts are still in place, and plans for this year’s convention are still progressing,” before acknowledging that, due to Pennsylvania Gov. Tom Wolf's order and Centers for Disease Control and Prevention (CDC) guidelines preventing large gatherings, plans are subject to change.

“The Board of Directors of Anthrocon understands that there are many concerns and that government and health officials may decide it will not be safe for us to gather this year,” reads the update. “We look to have a definitive answer by the end of May.”

The cautiously optimistic outlook is echoed by Anthrocon public outreach director, John "KP" Cole, who says that they would release an announcement even if the event was not canceled. As of now, Cole says people are still submitting ideas for panels at the convention, and regular attendees have informed him that they still plan on coming.

“Everything is continuing to evolve,” says Cole, adding that Anthrocon staff are in constant contact with the city's tourism promotion agency, VisitPITTSBURGH, about the availability of area hotels, many of which have closed or have furloughed workers, as well as the convention center, which has been under consideration as a possible triage center if local hospitals become overwhelmed.

Cole adds that many big furry events have already been canceled, including Furry Weekend Atlanta in Georgia, or postponed, with Biggest Little Fur Con in Reno, Nev. now happening in the fall as opposed to its original spring date.

While some may assume, due to their use of head coverings and full-body costumes, that furries might be at a lower risk of contracting the virus, Cole argues that it's actually the opposite.

“Keep in mind that when a person is wearing a costume like that, they're breathing heavier, and deeper and more frequently,” says Cole, an experienced furry with multiple characters, including a “happy-go-lucky Golden Retriever-type puppy dog” named KP, a fox, a tiger, and an extinct type of zebra called a Quagga. “At some point, you do have to take the head off because it does get hot, which means you're going to be hot, perspiring, breathing heavily. … You're much more likely to spread it and much more likely to catch it.”

There's also the added risk of being touched by people wanting to take a selfie – which is often the case with Anthrocon – as any contact would potentially contaminate the suit and the wearer when it's later removed.

Due to its status as the second-largest furry convention in the U.S. (Midwest FurFest in Chicago is considered the largest), not being able to host Anthrocon this year would mean a huge loss for the furry community and Pittsburgh. Though it originated in New York, the convention has made Pittsburgh its home for the last 14 years, bringing crowds of rabbits, dogs, dragons, and other colorful creatures to the Downtown area every summer.

There's also the economic impact Anthrocon has had on the city by bringing in tourist dollars, supporting local hotels and restaurants, and raising a total of $341,000 for local animal rescues and nonprofits.

She adds that VisitPITTSBURGH remains hopeful that Anthrocon 2020 will continue as planned, and has encouraged event organizers to follow the recommendations of the CDC and the Pennsylvania Department of Health, as well as guidelines from the City of Pittsburgh and Allegheny County.

She points out that the City of Pittsburgh has a “very special relationship with Anthrocon,” as its organizers have demonstrated “remarkable dedication to the city." Last year, she says VisitPITTSBURGH staff even participated in the convention's annual fursuit parade by handing out “I heart Anthrocon” cheer cards to spectators.

“We look forward to their visit every year,” says Wolfgang, adding that, no matter what happens, Anthrocon is expected to return in 2021.

For Cole, the feeling Pittsburgh has for Anthrocon is mutual.

“Pittsburgh actually thinks about us as friends,” he says, adding that he and other furries think of it as home, where they feel free to play and interact with people in the city.

Anthrocon even initiated a new art contest geared to Pittsburgh children and teens. Based on this year's convention theme of Aesop's Fables, the event will award $1,000 educational grants and other prizes to the winners in two age divisions. While the submissions may not display at the convention as planned, Cole says images of the art will be available on the Anthrocon website for anyone to see. The deadline for submissions is June 1, 2020.

Cole respects the need for social distancing and the dangers of the virus, especially for him, who, as someone with Type 2 diabetes, is at a higher risk for serious complications from COVID-19. Even so, he says he will be “heartbroken” if Anthrocon does not happen this year, meaning he won't be able to travel from his home in Florida to Pittsburgh to enjoy the festivities with fellow furries.

If it does happen, however, he wants it to be a “humongous celebration of life” for the furries and Pittsburgh.

“We really want to be there and we really get the feeling that Pittsburgh wants us there,” says Cole.