Another Pennsylvania is possible

City Paper highlights several state-level policies that voters want altered, and emphasizes which candidates can help them get there 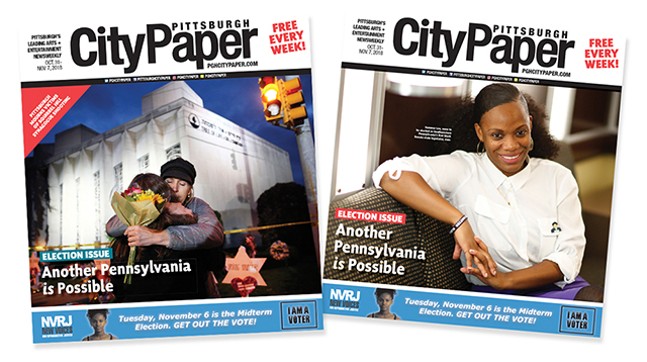 CP photos: Jared Wickerham
This week’s Pittsburgh City Paper cover on the left, and the original cover we had planned before the tragic synagogue shooting in Squirrel Hill

As our staff prepared Pittsburgh City Paper's 2018 Election Guide to be printed this week, tragedy struck our city. When something as horrific and unexpected as Saturday's shooting occurs, our priorities are shaken and things that seem important suddenly feel small. Details about word counts and photo captions mean very little by Monday morning. It's a safe assumption many Pittsburghers feel similarly this week.

The issue was planned to convey a mostly positive message about civic engagement. Summer Lee was on our cover, because she symbolizes to us a positive change for Pittsburgh: the first black female state legislator from our region. And yet, it's hard to focus on anything except mourning.

We knew we needed to honor the victims. But we also wanted to honor the community. During the vigil on Saturday, residents realized they could turn their tragedy into political action. Scores of people could be heard chanting “Vote, Vote, Vote.”

So, we kept our theme, with some adjustments. There was no approach that felt appropriate here, because there's nothing appropriate about what happened. But we felt that this election — even in its ugliest iterations as political theater — is worth focusing on at a time like this. Even after tragedy, or maybe especially now, Pittsburghers need to understand that another Pennsylvania is possible.

The laws and policies in action today can change tomorrow, but it takes a powerful will on the part of the electorate. Even at a time like this, when stakes are high and stances are hard-fought, citizens can struggle to channel that passion into actual change.

Voters don’t know all their representatives, and it’s understandable why. Between school boards, state senators, and federal offices, each resident has at least a dozen elected officials making choices on their behalf. It’s hard for most people to care deeply about all of them.

However, most people are aware of their state’s laws and policies.

Most Pennsylvanians know it is relatively easy to purchase firearms within the state and that just about anyone can buy semi-automatic assault rifles.

However, those realities don’t have to remain the same. Another Pennsylvania is possible; it just depends on how people vote. This City Paper Election Guide highlights several policies, protections, and laws that can become a reality if they receive enough support at the polls. Some will be harder to achieve than others, but they are all possible.

This issue also includes the thoughts from the women on CP's staff about why they feel it is important to vote, plus Hannah Lynn process a Jewish perspective on this weekend’s tragedy. Additionally, several portraits of local political candidates are featured throughout these pages. Each candidate symbolizes a fresh face of Pennsylvania politics — people who buck the state’s older-male dominated status quo.

With Democrats projected to flip the U.S. House, and President Donald Trump still in the White House, gridlock is likely on the federal level. Harrisburg is another story.

The state House and Senate are currently controlled by Republican majorities. The governor’s mansion is occupied by Democrat Tom Wolf.

Republican gubernatorial candidate Scott Wagner could win, giving the GOP a chance to push through many of their priorities. Though many predict Republicans will maintain control of the state House, research scientist Jonathan Tannen gives Democrats a 13 percent chance to flip that chamber. The state Senate is likely out of reach for Democrats, but even flipping a few seats could have a big impact.

If Wolf wins re-election, and Democrats make inroads, then many of their priorities will likely move forward.