Can you really hate a show starring a myriad of moppets left to languish under the care of drunken orphanage matron? 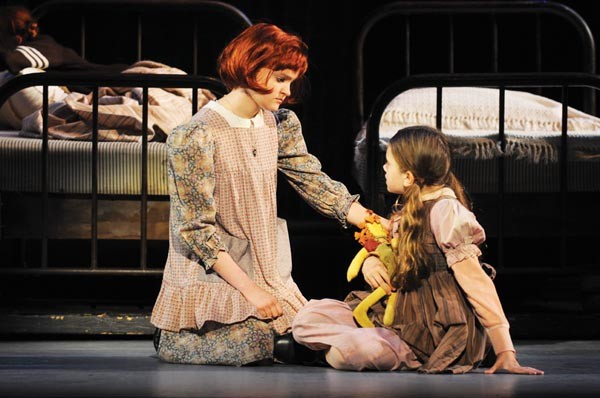 It's a hard-knock life, especially for critics who sit through countless revamps and rehashes of shows that, sometimes, were not very good in the first place.

Then there's Annie. The musical has always been an odd duck. With music by Charles Strouse and lyrics by Martin Charnin, this paean to those lavish 1930s musicals that promised Depressions needn't be depressing is barb- and bullet-proof; it's even headed back to Broadway for a 35th-anniversary production. Can you really hate a show starring a myriad of moppets left to languish under the care of a drunken orphanage matron?

Hate it? No. And the new Pittsburgh CLO production is entertaining despite a towering flaw. Johanna Loughran may be 12 years old, but she is a very tall 12-year-old. Too tall. She looms over all the other kids and nearly every adult. Even show-biz heavyweight Sally Struthers, who was hauled in to play hefty harridan Hannigan, can't catch up, and she's wearing heels.

What seems like a quibble is actually an alarming distraction. Loughran may be playing an incurably optimistic orphan who vows the sun will come out tomorrow; she may always hit her marks with confidence and a strong voice; but she never passes for an 11-year-old orphan. Never. Her copper Louise Brooks wig makes her look older, and her huggy and kissy scenes with billionaire Daddy Warbucks (played with well-worn charm by Conrad John Schuck) are a bit creepy. If director Charles Repole wanted Annie to stand out (in the wrong way), why not just hire Liza and give her one last comeback?

It's refreshing to see that someone of Struthers' bulk can move so easily around the stage. Tim Hartman's take on FDR is fun and somewhat daffy; Danette Holden is delightful as Warbucks' assistant Grace; and credit (and a few bones) must be given to Bill Berloni, who rescued and trained Macy, the mutt who plays Sandy. This is one star who is always on cue, running, pawing, lying down. At the end of each trick, he gets a treat from Annie (another distraction). But at least he can be called a dog and not howl about it. He's on easy street.