Last year, on the advice of both my doctor and parole officer, I stopped seeing so many shows and limited myself to just one a week.

To a certain extent, I can pick and choose, with the upside being that I will never, never again have to sit through what is unquestionably the worst play ever written -- The Three Sisters by Anton (Just Call Me Death) Chekhov.

The downside to picking what I see, however, is that when it goes wrong, I have no one to blame but myself. So I deserve no sympathy from you ... even though there's little that could go quite as wrong as Anna's Brooklyn Promise, a work by D.K. Oklahoma receiving its Pittsburgh (and quite possibly inter-galactic) premiere at South Park Theatre.

Supposedly set in a diner in New York, the show is about a recent widow (Anna) who meets a homeless woman (Bea) who might be crazy as well. Since Anna's not wrapped too tightly herself, if you ask me, she invites the homeless woman to move in with her ... something you find happening all the time in New York City. But as it turns out, Bea isn't crazy or homeless: She's just trying to escape her evil, greedy stepson and his wife.

And that little bit I just told you takes up the entire first act.

Bea sits stage left and three other characters sit stage right for nearly 45 minutes, trying to figure out Bea's story. Those of you in the advanced classes might wonder why the hell they just don't walk over and ask her. I'll tell you why: They don't, because if they did, the show would be over and we could all go home.

Nothing makes any sense, and the play is set in an imaginary world without phones or police or lawyers -- or any other reality that would melt the slender slice of cheese that is the plot of this play. The characters seem to have had their temporal lobes cauterized and, just to rub salt in the wound, Anna's Brooklyn Promise ends with a little life lesson to think about at home ... provided, of course, you don't intentionally drive into an oncoming truck before you get there.

After a little digging around on the Internet, I learned that D.K. Oklahoma is the pen name of one Ms. Donna Davis from (you'll never guess) Oklahoma, and the play is taken from an anthology of scripts written for senior citizens. If I were a senior citizen (and I'm only a few short years away), I would picket this play with signs that read "I May Be Old, But I've Still Got Taste!"

All in all, I'm not too surprised that the cast has so much trouble with the lines. For one thing, they're so badly written that the task of memorization would be Herculean. For another ... well, who'd want to learn these lines? Director F.J. Hartland's static direction is probably what the play deserves, and while the set is completely wrong for the play, it is quite handsome to look at.

I hate to be so negative with a review, so let me close with at least one bright spot: At least it isn't Three Sisters. 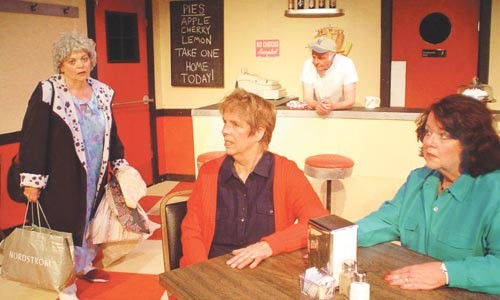