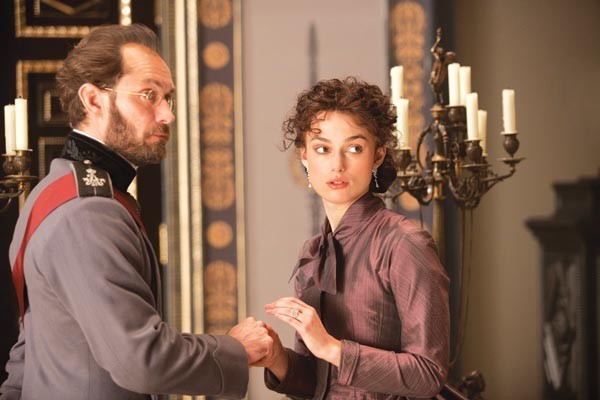 Good things about Joe Wright's cinematic adaptation of Leo Tolstoy's Anna Karenina: It's easier than reading the novel; the costumes, however anachronistic, are lovely; and the film kept a lot of craftsmen at work building elaborate sets.

That's right, sets. Because Wright's paramount creative choice was to stage this czarist Russian melodrama in a facsimile of a derelict grand theater, offering a series of rooms tricked out to look like theatrical sets, complete with proscenium, offstage rigging and over-sized props. Oh, and vaguely musical numbers, too.

It's all very visually impressive, but it's enough in-your-face artifice that it's difficult to engage emotionally with a story that demands it. (I had hoped this film would take advantage of Russia's actual sumptuous locales and dramatic scenery. What's the point of settling the Cold War if we can't film our sweeping Russian melodramas on site?)

Sorry to ramble on about the "décor," but it was more memorable than the story, adapted here by playwright Tom Stoppard into a thin gruel of The Tragedy of the Fallen Woman.

Anna (Keira Knightley), bored with her husband (a wonderfully dull Jude Law), takes up with a dashing lover, Count Vronsky (Aaron Taylor-Johnson). Then, the affair is discovered and she is drummed out of society. Meanwhile, in a poorly integrated subplot, a land-owner (Domhnall Gleeson) works in the fields alongside peasants, and later, makes an inexplicable marriage. Finally, bad, if predictable, things happen. The end.

I mean no disrespect to Tolstoy: They tell me he wrote a grand, emotionally rich novel, rife with treatises on morality, class and Mother Russia. Wright's version has the feel of a particularly well-budgeted BBC program, complete with frilly hats, archly delivered dialogue, the standard retinue of British thespians and even a silly hand-jive dance that wouldn't have been out of place on Monty Python.

It sure doesn't feel Russian, or even particularly tragic. Knightley's Anna is vapid: She preens, pouts and heaves her bony bosom, but the overall the effect is of a stylized couture campaign. The passion of her self-destructive affair with Vronsky never engages, and the miscast Taylor-Johnson, with his foppish golden curls and just-so officer's togs, looks like he escaped from a Swinging London pop band.

Adapting a huge novel for the screen isn't an easy task. But rather than tease out the emotional meat of the plot, Wright chose to double down on an outlandish production, intentionally designed to underscore the film's theatrically. Thus despite all its fancy trappings and wrappings, Anna Karenina felt spare and rote: a steady march through set pieces to its neutered conclusion. In sum, the wrong sort of Russian tragedy.