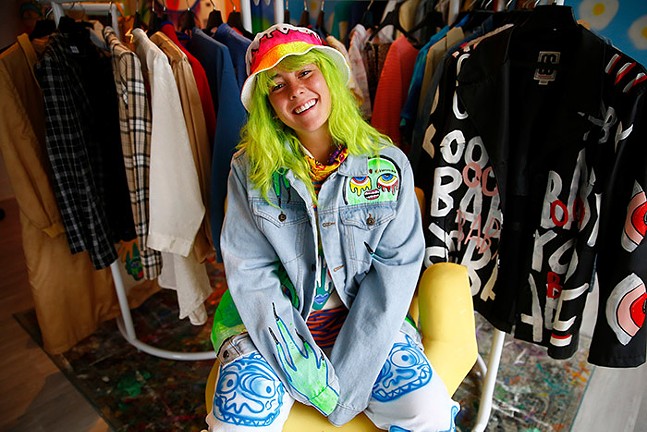 CP Photo: Jared Wickerham
Anika Ignozzi, owner and designer of Ooh Baby, poses for a portrait inside of her Millvale store.
Anika Ignozzi has enjoyed a career trajectory that most professional artists would envy. At 22 years old, she has already established OOH BABY, a business where she makes original, hand-painted pieces out of upcycled clothing and accessories.

Now, two years after creating OOH BABY, she has a storefront in Millvale. Located on Grant Avenue, the new space — which officially opened on Mon., Sept. 5 — will serve as both a place to sell and as a studio for Ignozzi to create. It’s a step up from making clothes in her room, which is what she had been doing.

“It’s kind of like a double whammy,” says Ignozzi, who lives in Garfield.

Her clothes, which are also for sale on her website, are a youthful array of bright, fluorescent colors and renderings of eyes, faces, and animals. Think Betsey Johnson with a generous dash of DIY punk aesthetic.

Ignozzi says her style comes from wanting to give people more interesting looks to show off.

“I just saw all the boring clothes around, and I wanted to wear something weird and colorful,” says Ignozzi, adding that she receives “a lot of compliments” whenever she wears one of her pieces out. “I want everyday people to be able to wear something crazy and get, like, 15 compliments in a day because when the hell does that ever happen? … It brings an opportunity for people to communicate with others, and it’s just a fun thing that I want everyone to experience.”

She made over 100 one-of-a-kind pieces for the Millvale storefront, where customers will find adult clothing in a range of sizes. She uses acrylic paint for the designs, which are then made weather-safe with a layer of clear coat finish. She stipulates that her pieces should be hand-washed.

While most of her pieces retail at $100 or more, she also sells handmade “knick-knacks” at lower prices. And clothes aren’t her only canvas. She also produces custom paintings and has already made the Millvale space her own by putting murals up on all the walls.

But while she has made a name for herself in the local creative scene, Ignozzi started out about as far from art and fashion as one could, as a college athlete studying to be a physician’s assistant at Wagner College in Staten Island, New York.

“I was so involved with sports,” says Ignozzi, a soccer player who received a scholarship to attend Wagner. She says that while she had an interest in art, and even took some classes, she never believed being a professional artist was an option, especially as someone from Lower Burrell in Westmoreland County.

CP Photo: Jared Wickerham
“Growing up in a small town, it’s kind of like your ticket out, getting a scholarship and going to school,” says Ignozzi. “I had never met an artist growing up.”

She says being exposed to the culture and fashion of New York City during college changed everything. Unable to switch her major, she dropped out of Wagner and moved to Pittsburgh, where she started OOH BABY.

After launching the company, she quickly got involved in Pittsburgh Fashion Week. Soon after, she and some friends discovered the Artisan Market while doing a fashion shoot in the Strip District, and Ignozzi has been selling her clothes there ever since. She has also sold at events like the 2019 Spirit Summer Recess in Lawrenceville, and worked with local artists, musicians, and fellow fashion designers at the Battle of the Beasts show at Mr. Smalls Theatre in February.

With the storefront, she also sees a chance to work with and support other Millvale businesses, including the nearby B-sides Vintage Clothing shop and Curated Flame, a store that sells CBD products and glassware.

“I was like, ‘This is perfect, and we can all generate business for each other,’” says Ignozzi.

CP Photo: Jared Wickerham
As for opening a store in the middle of a pandemic, she plans to just play it by ear.

“Honestly, I have no expectations,” says Ignozzi. “I don’t know what the hell I’m doing. I’m just going for it.”