Winning just about every award a play could (including a 1992 Tony and Pulitzer), Tony Kushner's Angels in America not only bowled over critics (several of whom called it the most important play since Godot) but found favor with audiences as well.

On the surface, Angels would seem the least likely of candidates for public acclaim. Made up of two full-length parts (Millennium Approaches and Perestroika), this huge play covers subjects bleak (AIDS and death), hideous (Reaganism and the religious right) and just plain sad (the dissolution of love and the destruction of family). It's also frankly -- though by no means exclusively -- a gay play, and while things aren't all groovy gay-wise today, they were far, far worse back in the early '90s.

So how did Angels ever become a sensation?

Because Kushner's a genius is why, telling something no less than what it means to be an American in the second half of the 20th century in this sweeping, epic drama.

We zigzag around the mid-'80s, following the lives of four people: Prior Walter, the gay black sheep of a Mayflower family, starts the play with the discovery of his first AIDS-related illness. His boyfriend, Louis Ironson -- much better with benign intellectualism than malignant reality -- sees nothing but the loss ahead and flees ... into the dangerous arms of Joe Pitt, a Mormon lawyer whose vision of what's pure and good does not include his own hidden homosexuality. Sitting on the sidelines watching (and at times suffering from) her husband's struggle, Harper Pitt is driven into the comforting arms of Valium.

As sharply drawn and counterbalanced as Kushner has made them, these four could easily make up a rewarding play about anguish and the half-life of love. But Kushner's only warming up, and with the addition of four other characters, he explodes the landscape of Angels.

There's Belize, Prior's best friend, an African-American nurse (and "ex-ex-drag queen") who is the political conscience of the play and, one assumes, Kushner's own voice. Hannah Pitt, Joe's mother, sells her house in Utah and moves to NYC after a drunken coming-out phone call from Joe (based on a call Kushner had with his own mother). Then there's The Angel, who comes to earth to charge Prior with a great mission. And, finally, Roy Cohn, based on the real right-wing monster (and AIDS-related fatality) and rendered by Kushner as one of the greatest characters in American theater.

The University of Pittsburgh Repertory Theatre presents Millennium Approaches in a production directed by Holly Thuma. (Perestroika opens April 2.) And first, let me say that this mostly student company deserves a big round of applause for tackling such a mammoth work, and acquitting themselves so handsomely.

Moreover, and though I found the dramatic stakes a little muted, Thuma moves the play brilliantly, like an express train. If some of the nuance is sacrificed, she never loses sight of her essential duty to tell a story. And she has done amazing work guiding these students through this sprawling tale: Jessica Reed, John Graham, Tim Zeddies, Christine Sealy, Brenden Gallagher, Ana Carolina Noriega, Jim Moore and Martel Manning.

A few roles are played by professional actors Elena Alexandratos and Doug Mertz. As Hannah, Alexandratos doesn't get to unfurl until Perestroika; Millennium is about the sickness and self-negation of the patriarchy as exemplified by Cohn, and as played here with the staggering insight and gale-force talent of Doug Mertz, who makes Cohn's evil hideously human.

Millennium has always been the more user-friendly of the two parts, so the folks behind the upcoming Perestroika (with different students playing the parts) have got a big challenge ahead. Let's hope they do as well. 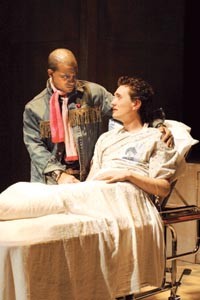