Will the Vatican explode into anti-matter? Not with a symbologist in the house. 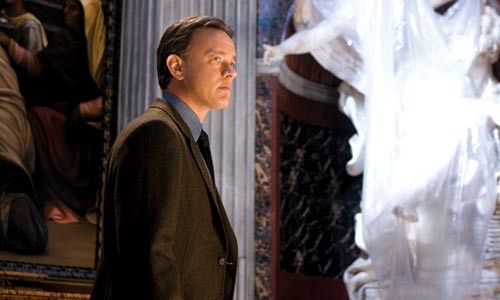 Get me a symbologist! Tom Hanks, on the job.

My favorite part in Angels and Demons is when a major character rears up off the floor, violently points at another and accusingly shrieks: "Illuminatus!"

Look, this is a B-movie, albeit with an A-list star and a zillion-dollar budget, so you might as well play to the cheap seats. I haven't been so thrilled with a finger-point since Donald Sutherland rocked our world way back in 1978's Invasion of the Body Snatchers.

You gotta love any work unafraid to open with a somber depiction of the pope's funeral at the Vatican, before rapidly cutting to a scene titled "Large Hadron Collider" -- where in short succession we see the birth of anti-matter and the death of an eyeball.

But here's the real trouble: As the cardinals convene to pick a new pope, the four "preferred" red robes are kidnapped. A communiqué -- from the super-secret, centuries-old, science-defending Illuminati -- says these cardinals will be executed over the next four hours. But the letter full of odd phrases like "path of illumination" is a virtual map for a noted historical decoder like Langdon. Thus he, along with a comely lady physicist and an assortment of Vatican and Roman law enforcement, set off on a race against the clock to save the cardinals and ... even The Very Church Itself!

Lending a hand is the deceased pope's camerlengo (something like an executive assistant), a glib Irishman (Ewan McGregor) who respects both sides in the ongoing faith vs. science debate. Angels however offers only a meager discussion of this conflict. Ultimately, the film comes down so genially and gently on the side of God and the Catholic Church that it's no wonder the Vatican's own newspaper last week declared the film "harmless entertainment," a far cry from the furor Code stirred up.

Frankly, I preferred Angels to Code. Hanks is a likable actor, and this time out, his Langdon has a less-distracting hairdo and a looser, funnier manner. As always, McGregor, Stellan Skarsgård and Armin Mueller-Stahl are welcome additions to any over-the-top narrative that demands utterly ludicrous lines delivered with complete gravity.

It helped too that I hadn't read the book, and therefore the silly story was at least fresh, and to my eyes, ran in a straightforward manner. Howard (who also helmed Code) grafts relatively believable action -- Hanks climbs a bookcase, a lot of people get shot -- with the requisite backstory mumbo-jumbo and good production values. Toss in a pretty, if frantic armchair tour of Rome's churches and piazzas (even if some are Los Angeles stage sets), and this two-hour-plus film goes by quite easily.

Provided -- of course -- that you leave most of your brain at the popcorn counter. You'd break a sweat racking up what this story defies: logic, time management, police procedure, Vatican protocols, Rome's notorious gridlock and quite possibly the very properties of matter. This is summer silliness to take on faith, not science. In English, and a smattering of foreign languages, with subtitles.