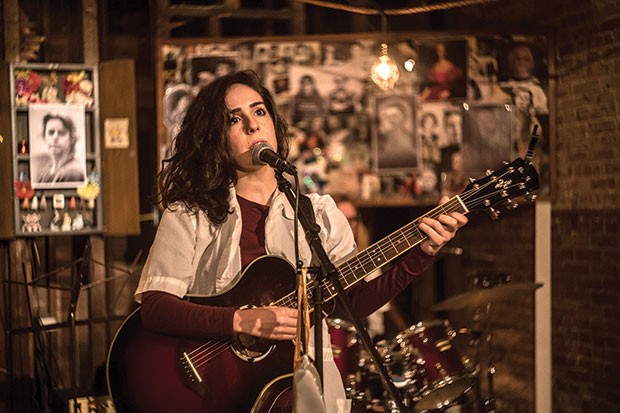 Angelmakers is no docudrama, nor a play. It’s an hour-long cabaret of ten songs, most in the voices of true-life killers. Beirut-based performer Milia Ayache sings and plays guitar, backed up by Pittsburgh musicians Zorahna, on bass, and drummer Michele Dunlap.

If it’s provocative to have empathy for killers, the troupe pulls it off, thanks largely to Rice’s lyrical gifts (familiar to audiences of The Saints Tour — Braddock, Real/Time’s immersive 2015 collaboration with Bricolage Production Co.). “There is a poison made of only our breath,” sing Gwen Graham and Cathy Wood, nurses’ aides who killed five elderly patients. “You think he’s gonna sing low, the devil, but he’s gonna sing high, way way high, like me,” preaches Velma Barfield, a devout Pentecostal who poisoned six, in another standout number. Other characters include Aileen Wuornos and the vampiric Countess Elizabeth Bathory (b. 1560).

Rice doesn’t always match musical genre to character and time period. So while Gwen and Cathy’s theme suggests a ruminative ’80s dance hit, Janet Toppan, a nurse executed in 1938 after murdering 33 patients, gets a nervy, Jim Carroll-like rocker whose refrain goes, “I’m sorry, everybody. I’m sorry I can’t feel it.” There’s humor, too: In her country stomp, Velma notes that roach poison is “only 60 cents!” And Ayache, an arresting presence, showcases her vocal chops in the Gypsy-inflected title track, sung by Hungary’s Zsuzsanna Fazekas, who encouraged women to poison irksome family members (“I’ll show you how to make him an angel”).

Angelmakers is staged in a former Slovenian social hall in Lawrenceville, freshly gutted and undergoing renovation as Aftershock Theatre. A preview performance felt a bit tentative, but I’m guessing that by the time you read this the cast will be totally killing it.