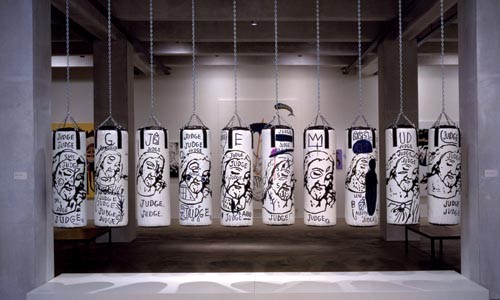 God bullies: "Ten Punching Bags (Last Supper)," by Andy Warhol and Jean-Michel Basquiat.
Personal Jesus, at The Andy Warhol Museum, joins Andy with compatriot Keith Haring, focusing on their explorations of religion. While these are artists we know enough to have expectations, this exhibition highlights work that may cause us to perceive them, as both artists and men, in a new, more shadowy, light.

Warhol is represented by fewer works, but what's included packs maximum impact. Let's be honest: While analysis of Warhol as artist -- creative or con, credible revolutionary, exploitative Barnum, starmaker, starfucker, genius or sham -- can set worshipers against disparagers until the final bell, debate upon his depth isn't likely to last halfway through the first round.

And indeed, silkscreens of a cross set between a pair of dollar signs won't shock; replicas of "The Last Supper" in black and white, with blocks of color washed on top, are what we'd imagine. Smaller works uniting text and image -- a floating hand marked with triple sixes above the words "The Mark of the Beast"; a figurine of Jesus (a representation of a representation, not of the "real" thing) with an advertised cost of "only 9.98" -- might give pause. And the declaration that "Heaven And Hell Are Just One Breath Away!", fashioned more as the latest must-see event than as a caution on the nearness of eternity, merely provokes wittily.

Yet unexpectedly, in this show curated by Warhol Museum director Tom Sokolowski, are intimations of gravity and a sounding to another fathom. Breathtaking are Warhol's own "The Last Supper," a wall-sized piece combining images from the Da Vinci work -- repeated figures of Jesus, Judas, interchangeable apostles -- with motorcycles, eagles and isolated bits of slogans. "Ten Punching Bags (Last Supper)," a collaboration between Warhol and Jean-Michel Basquiat, is what it sounds like: a series of heavy bags bearing an identical image of Christ. They vary by the addition of the word "judge." It's omnipresent but rendered diversely: neatly, below the portrait; scrawled across a forehead; once in a thought bubble spurting from the noggin of Christian mythology's favorite martyr. The verb (noun?) is unmistakable, but it's sketchy what or who is doing the judging, and what unlucky bastard is on the receiving end.

If what surprises from Warhol in Personal Jesus is depth, what takes us aback from Haring is darkness. Haring justifiably entranced the masses (whether they knew they were absorbing the works of a Major Artist or just liked the looks of those outline-figures jumping around) with glorious, unpretentious accessibility. That user-friendliness was rooted not only in brightness of color and simplicity of shape, but in the celebratory feel of his most recognizable work.

That same joyousness is present in some works here. In a series with pregnant women whooping it up beneath a levitating baby, more figures dance-dance-dancin'! is exactly what we know and love. But the spirituality these images express is void of any symbolism decipherable as referencing organized religion. When such symbols do appear, the mood changes: They bring flames, currency, blades and blood. Halos don't hover inanimately above holy heads; they bind and clutch. Bibles are ablaze with hellfire, and crosses set hearts to bleeding. "Purple Heart 5 Nov 1989" portrays a cross flanked by, well, rears -- torsoless asses shitting cash. The cross in an untitled 1987 work is composed of phalluses ready for rape.

"Marriage of Heaven and Hell" is classic Haring figure work via Hieronymous Bosch: a miasma of crocodiles and corpses presided over by disinterested angels. The "Apocalypse" series, produced in alliance with William S. Burroughs, gives us more detailed work than we generally see from Haring, to more specifically depict disaster.

To some (this writer included) this is a whole lot of fun, not only of its own accord but because it guarantees you'll never look at that innocuous outline-baby in the Santa hat the same way again.

We may or may not agree with the philosophies displayed; there's nothing touchier for many than old what's-his-face in the sky and the lengths of oppression and violence traversed to promote his message of peace. But regardless of our own convictions, there's no denying the revelation offered in Personal Jesus. It takes two men we thought we knew and shows us sides we may never have anticipated. That alone is godly.