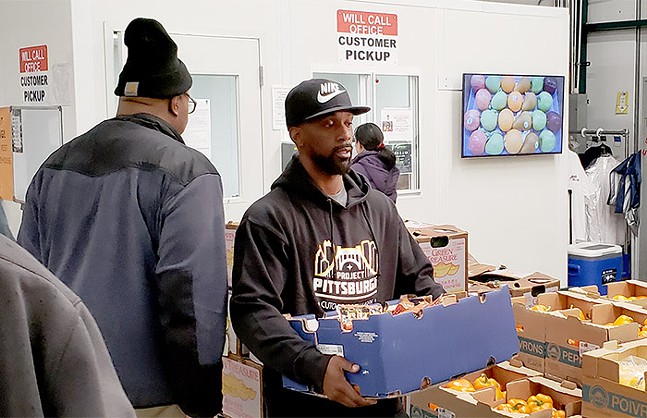 CP photo: Josh Oswald
Pittsburgh favorite Andrew McCutchen volunteering in the Strip District
Back in 2015, when the Pittsburgh Pirates were still having winning seasons and the Roberto Clemente Bridge was always guaranteed to be full of excitement before home games, Pittsburgh City Paper readers crowned Andrew McCutchen as their choice for Best Local Male Athlete in the annual Best of Pittsburgh readers' poll, winning him the spot as that year's featured cover photograph. 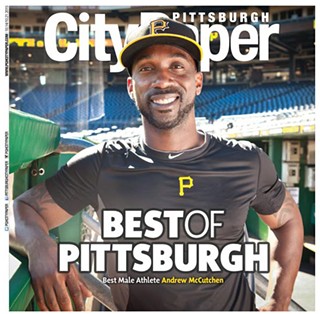 Two years later, on Sept. 27, 2017, McCutchen, or Cutch, swung his bat for the last time at PNC Park as a Pittsburgh Pirate before being traded to the San Francisco Giants, and later, the Philadelphia Phillies. On May 11, 2018, Cutch returned to the North Side ball field for the first time since his departure and was greeted to a standing ovation that, according to CP writer Ryan Deto, "felt like it would never end."

"Cheers, whistles, and horns wailed out even beyond the stadium in the Allegheny River," Deto said of the game. "They rooted for him to get hits, and booed when the home-plate umpire called him out on strikes, even though he plays for the opposing team."

More than two years after he last wore a Pirates jersey, the love the city has for their once-hometown hero continues today. And lucky for us, Cutch seems to love us right back. Social media feeds this week have been full of McCutchen helping out in communities around the city. Starting last Saturday, according to the Pittsburgh Post-Gazette, the former Pirate is spending eight days volunteering in the community for "Project Pittsburgh," working with local organizations like Habitat for Humanity, the North Side's Light of Life Mission, and The Free Store in Braddock.

This morning, City Paper was there as he donated his time to help another hometown hero: 412 Food Rescue, who CP's editorial staff crowned as one of its Pittsburghers of the Year in 2018 for its work not only helping people in need of fresh produce but celebrating the organization's expansion to other cities. (Launched in 2015, 412 Food Rescue redirects unused healthy food to nonprofits that serve communities in need to eliminate food waste.)

This Friday is one of the best! So much GRATITUDE @TheCUTCH22 for all you do. For @412FoodRescue . For #Pittsburgh. For People. ♥️ #cutchweek pic.twitter.com/cx85myJT7B


"Fortunately, I always grew up knowing where I was going to get my next meal from," McCutchen told CP's Josh Oswald this morning at Consumer Produce in the Strip District, where he helped pick up leftover produce to be donated. "But I know that this is something that is needed around the city and why they have this organization."

"I've been to Light of Life Mission. I partnered with Macy's, and we had a group of students, and we were able to donate and get them new suits and job interviews with interview coaches," McCutchen said, adding that he will be continuing his volunteering tomorrow at a baseball camp ... if only it were the Pittsburgh Pirates.