Two years ago, André Costello and the Cool Minors debuted their sophomore album, Resident Frequencies, in a fittingly out-of-this-world way. Inside Carnegie Science Center’s Buhl Planetarium, the band, led by Costello, performed the entire record, choreographed to a laser show and 3D dome projection. On Sat., Feb. 8, they're returning to the planetarium with a set of never-before-heard material.

“The last time around, it was a preview for an album that was polished, finished, and had a release date for a couple months later,” says Costello. “[The music we’ll be playing on Saturday] doesn’t have a set release date, but it is in the same spirit of, ‘This is going to be a special event.’”

Another difference between the shows is that the music has never been played in front of an audience before.

“That first set of material, we had been playing it live for a couple years here and there,” says Costello. “As we were recording it, we’d try out songs and play them at shows as they came.” 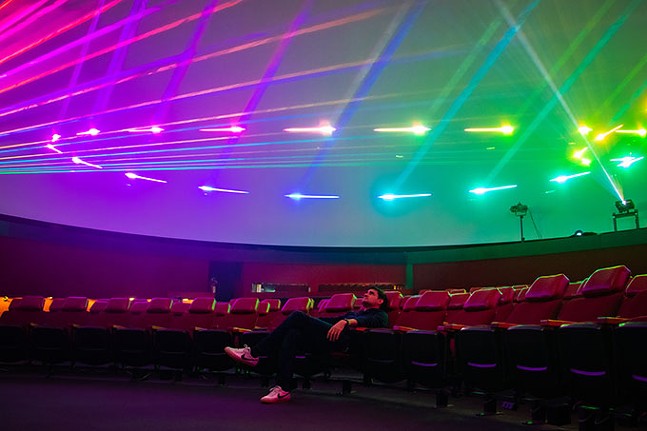 The first track on Resident Frequencies, “Broken Noses,” for example, was around for about four years before making it onto an album.

Costello and the Cool Minors are currently in the process of recording their new music, but the “timeline for the album is nonexistent.”

However, audience members can expect to hear a few familiar tunes, as the band plans to play some of their greatest hits and a couple of deep cuts — “those longer, trippier songs.”

“We planned the flow of the show and the order of the show based on a rising action, like a climax,” says Costello. “We try to plan all our shows that way, but this one we really got into the weeds a bit.”

In addition to the setlist, Costello also has complete control over the projections and lasers. He’s been meeting with folks at the planetarium to bring his vision to life.

“Once I get over the anxiety of all the moving parts, then I can focus on these wonderful moments that I have,” says Costello. “I go in there, and I’m like, ‘Do you have anything like this?’ She’ll throw it up on the dome, and I’ll be like, ‘That’s really nice looking, let’s go with that.'"

Costello is most excited about the start of the program. When entering the planetarium, attendees will be greeted with a forest view, so when seated — the seats recline, making the ceiling or "dome" the main focus — the viewer feels as if tall trees surround them.

“It’s a 3D effect when all of your vision is occupied by the screen,” says Costello. “What’s really cool is that it’s such a unique experience, you could probably see any band in there, and it’s going to be amazing. But to be able to be the person steering the ship, this is a creation of art in my mind; I find it to be a very gratifying experience to be able to get all these people on board and make it happen.”

Once it’s start time, the forest view will slowly transition into a nighttime scene. Joey Spehar, host of the Morning Mix on WYEP, will do a short intro, and then the show will begin.

“After the last one, someone came up to me and said, ‘This makes me happy to be alive,’” says Costello. “It was the best thing that anyone’s ever said to me. Especially about going to see a local band show. It is really unique and really special.”