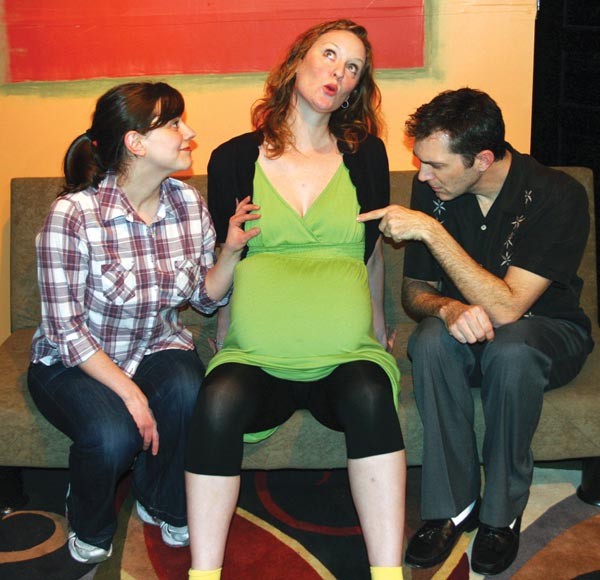 Tressa Glover (left), Robyne Parrish and Tony Bingham in And Baby Makes Seven, at Off the Wall Productions.

Off The Wall Productions again lives up to its name, offering a play which clambers and crawls over provocative space, defying conventions, prodding us to ponder what's inside.

It's Paula Vogel's And Baby Makes Seven, which preceded her Obie Award-winning The Baltimore Waltz and Pulitzer-winner How I Learned to Drive. This doesn't equal either.

Vogel appears to be pointing up nature's mad trick on lesbian couples — they need men's help to create babies — by having such a couple crazily compensate by inventing their own imaginary children.

Ruth and her partner, Anna, await the birth of a real baby fathered by Peter, who lives with them. They decide to kill the fake kids, to make the genuine infant's home seem more normal. That certainly has the potential for comedy.

Yet rather than developing characters, Vogel spends precious time and space concentrating on the women personifying those kids. And she throws in such gratuitous elements as references to Shakespeare plays, The Exorcist, Robert Anderson's Tea and Sympathy and the French movie The Red Balloon. Truly exceptional actors could find ways to make these people distinctive and special, but this cast doesn't get a chance; director Linda Haston's fast pace focuses on playing it big and loud, more for comedy than depth..

The criss-crossing into and out of multiple personalities could come across better, even funnier, if the women looked as though they thought they were normal, delivering lines innocently. And if the imaginary children likewise seemed innocent and vulnerable — not bratty, as in this case — those six people could elicit some sympathy and understanding. It would also help if they displayed some affection for each other; in this production, they don't.

Tressa Glover has the biggest task, playing Ruth plus two children. She carries off many scenes with remarkable versatility. In the few quieter moments, Robyne Parrish gets close to making Anna behave as if she thinks she were normal, with her alter-ego kid occasionally sounding nearly reasonable. On the other hand, Tony Bingham's Peter stays insufficiently defined and stuck with over-the-top bits from Haston.

Haston and her cast took on a difficult assignment, a challenge for anybody. Vogel's work got better thereafter. Thank goodness.