CP photo: Jared Wickerham
Moraine State Park
Earlier this month, I spent part of an afternoon walking among families listening to music on portable speakers, kids playing games in the grass, and parents prepping for outdoor barbecues. It was midweek, and it was as relaxed as I had seen people act since the start of the coronavirus pandemic. Everyone was social distancing from strangers, and many people wore masks as they visited restrooms or other shared spaces. It was calming — even uplifting.

CP illustration: Abbie Adams
This was at Keystone State Park, just south of New Alexandria in Westmoreland County. And in addition to being a welcome respite from life indoors, it was nice to see how unexpectedly diverse the visitors were. I say unexpected because Westmoreland County is one of the whitest and most native-born counties in America, and its population is declining and aging at a rapid pace. But you wouldn’t know it at this state park, where there were Black and Brown people and immigrant families having picnics and playing in the lake.

If you visit any of Pennsylvania’s 117 state parks, there’s a good chance this scene will be replicated, even though the state is more than 80% white and has a large percentage of senior citizens. I personally have been to well over a dozen parks across the state and have seen similar scenes with a diverse set of happy-go-lucky patrons enjoying the outdoors. Many of these are in rural areas.

I believe this is because Pennsylvania's state parks are among the most inclusive and accessible places in the commonwealth. They’re free of charge to visit and many are relatively easy to find. And with sports, festivals, concerts, and other events being largely on hold due to the pandemic, state parks will likely become even more important, as they are large enough to provide recreation while allowing for safe social distancing. Attendance at state parks is already up considerably compared to last year.

This essay is an ode to the parks throughout the commonwealth. It’s not a balanced look at whether the state should keep them free or shrink funding to the parks. It’s a love letter meant to encourage people to patronize the parks they own. It’s a reminder that we are in the midst of one of the most stressful summers in recent history, and I believe that Pennsylvania's state parks can help us stay calm, gain joy, and persevere through it all.

CP photo: Lisa Cunningham
Raccoon State Park
In the late 1800s, Pennsylvanians started conserving land for state parks. The logging industry was decimating the commonwealth’s forests and according to the Department of Conservation & Natural Resources (DCNR), the state was becoming the "Pennsylvania Desert,” even as the name Pennsylvania literally translates to Penn’s forest. The Pennsylvania Forestry Association, a precursor to the state park system, was formed in 1886. 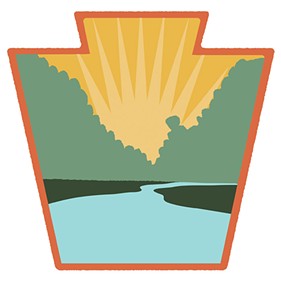 In 1893, land was acquired to make Valley Forge, the commonwealth’s first state park and the site in Southeastern Pennsylvania where George Washington encamped his army during the American Revolution. Valley Forge was eventually turned into National Historical Park, but the idea set aside land for recreation and conservation stuck.

By 1902, Mont Alto State Forest Park in Franklin County was created, and it had picnic facilities, a swimming pool, a refreshment stand, and hiking trails. Throughout the 20th century, any time Pennsylvania experienced times of prosperity, it added new parks. And this continued into the 21st century. Erie Bluffs State Park was created in 2004. It’s the newest park to the system, and it protects the largest undeveloped stretch of lakeshore in Pennsylvania. It’s a wonderful change of pace from the crowded beaches and bike trails of nearby Presque Isle State Park.

In March of this year, the state acquired 1,700 acres of land for preservation in southern Chester County, and expanded the White Clay Creek Preserve. Growing and adding parks is popular, even in a state that is well-known for supporting industries that extract natural resources like coal, oil, timber, and natural gas.

DCNR secretary Cindy Adams Dunn says this is a great year to explore the state parks, and notes that people are already doing so in large numbers. May 2020 attendance across the state park system is up nearly 36% compared to May 2019.

There were more than 5.7 million visitors to a Pennsylvania state park last month.
Dunn reminds visitors to plan ahead, bring masks, and use hand sanitizer, but is also thrilled at the record-breaking attendance so far at the parks. She says “maintaining mental and civic health is more critical than ever” and that patronizing parks, hiking on trails, and paddling in the waterways is key part to that effort.

Dunn says it’s the mission of the parks department to be as accessible as possible. The goal of the department is to have every state resident live within 25 miles of a state park, and that’s true for a large number of Pennsylvanians. She acknowledges that many parks are only accessible by car, and that’s something the department is trying to improve. (Point State Park in Downtown Pittsburgh is a good example of a transit-accessible park for those without access to a vehicle.) State parks also serve as a big part of Pennsylvania’s growing tourism industry. Dunn says free state parks are like “bait” for attracting visitors, and that communities, rural and mostly suffering from industrial decline, have been wise to create businesses catering to visitors.

Anyone who has been to Ohiopyle State Park and the small town of Ohiopyle can speak to this. The town is bursting with new restaurants, farm stands, hostels, and bike rental and bait shops. But it’s not just Ohiopyle with its popular natural waterslides and nearby landmarks like Fallingwater — other parts of the state are also seeing this benefit.

Dunn recommends visiting Oil Creek State Park just outside of Oil City in Venango County. The park shares the unique history of the area (the park is adjacent to the first successful commercial oil well in America), and features a shaded bike path that runs along the creek and a few remote waterfalls. Oil City has suffered population decline since the 1930s and has an above-average poverty rate. But maybe the state park can provide a boost, as May 2020 attendance is up 113% compared to last year.


There were more than 5.7 million visitors to a Pennsylvania state park last month.

Research from economist Juha Siikamäki taken from 2011 data indicates that state parks throughout the nation contribute to about one-third of all outdoor recreation in the U.S. His research also suggests that state parks, which contribute $14 billion to the U.S. economy annually, create value that is “considerably larger than the annual operation and management costs of state parks.” Basically, state parks pay for themselves and then some.

Even so, it’s obvious that many Pennsylvanians don’t view state parks this way. I have personally been on many trails, even on weekends, and not seen a soul. While visitation and use of picnic areas are high, I rarely hear people talk about state parks in Pennsylvania the way that Californians, Coloradans, or New Englanders do.

Dunn is proud of Pa. state parks but admits as much. “California and Colorado, they get all the attention,” says Dunn. “Pennsylvania is actually fifth in the nation in the outdoor industry, but we haven't seen that coalition form between the businesses and the asset managers and the public. We really understand that recreation is a big part of that value, but we don’t coalesce around that as much as we should.” 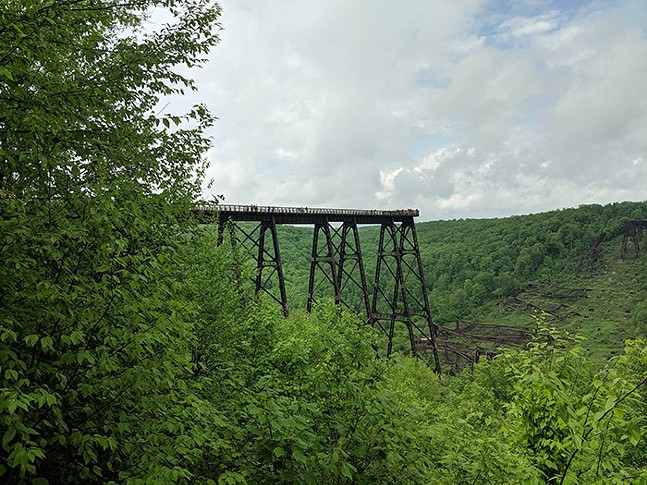 CP photo: Lisa Cunningham
Kinzua Bridge State Park
I think that should change. Pennsylvania parks provide wonders that should make any other state jealous. Kinzua Bridge State Park offers stunning views of a deep Appalachian valley, and the history of a large train viaduct that was wrecked by a tornado. Dunn says that every Pennsylvanian should see the wild elk that roam near the Elk Country Viewing Area. “[People] are stunned when they see them,” says Dunn.

And even without the natural or scenic wonders, Pennsylvania state parks just provide great opportunities for swimming, picnicking, canoeing, and hiking, and contain modern and well-maintained amenities. And they are free to the public. Camping and cabins (some with heating, beds, and fridges) are also available for a small fee. Linn Run State Park has cabins right along a literal babbling brook.

Dunn hopes that people take advantage of the camping and other recreation opportunities this summer. She says that visitors looking to swim or rent cabins on weekends might want to prepare for disappointment since she expects demand for campgrounds to be up, and parks are limiting beaches to about 50% occupancy as a way to maintain social distance. She says day trippers and campers should make back-up plans in case parks are too full.

In the end, however, she hopes that visitors will spread the word about their experiences at state parks, in hopes this will create a positive feedback loop and give Pennsylvania's state parks the recognition they deserve.

“We are seeing more new people trying new things. And we are hoping they become permanent fans once they have a taste of the parks,” says Dunn. “People should use their social media and say how they enjoyed [the parks]. It will encourage more people to come and remind people how welcome they are at the parks.”