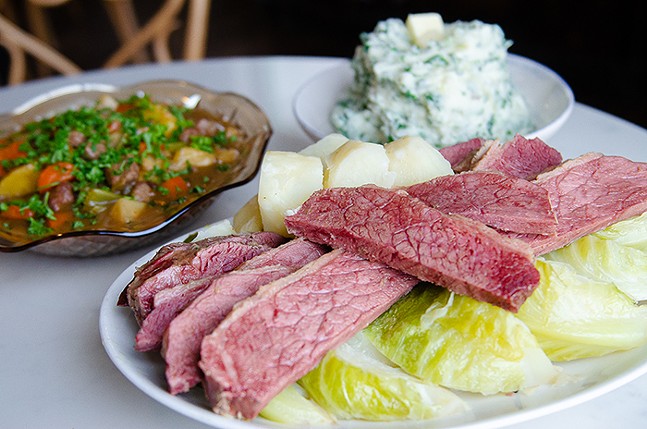 Burgh'ers
Local brewery and burger joint Burgh'ers Brewing announced they will be opening a new location at the Highline in East Carson Street in the South Side. This will be the third location for Burgh'ers, with spots already in Lawrenceville and Zelienople. An opening date has not yet been announced. 319 E. Carson St., South Side. burgherspgh.com

Good Eat$
The Pittsburgh Downtown Partnership recently launched Good Eat$, a program to encourage people to patronize Downtown restaurants. On Tuesdays and Wednesdays, diners can enjoy a 25% off discount from select restaurants, including Bae Bae's Kitchen, Hello Bistro, Market St. Grocery, Sree's Foods, and more. The difference in cost is covered by the Richard King Mellon Foundation, and the program runs only as long as funding lasts. downtownpittsburgh.com/goodeatsdowntown

Barrel & Flow Festival
The beer festival previously known as Fresh Fest is rebranding as the Barrel & Flow Festival. Despite the change, the festival will have the same goals. "Our collaborations and aims of economic empowerment for the Black community continue, just as significant and necessary as ever, with global aspirations and national amplifications," states the festival's website. Their first event under the rebrand will occur over Sept. 10-12 at SouthSide Works. barrelandflow.com

Dianoia's Eatery
Though the Strip District restaurant is known for its Italian fare, Dianoia's Eatery will be offering a special Irish menu on March 17 (St. Patrick's Day). Lunney's Eatery, as the restaurant is calling it, with classic Irish dishes like soda bread, corned beef, cabbage, Irish ginger snap cookies, and more. The dinner is available to order from the "web shop" section of their website. 2429 Penn Ave., Strip District. dianoiaseatery.com

VEGED!
Join writer Natalie Bencivenga for VEGED!, a new vegan cooking web series. Filmed out of Don's Appliances, the show will feature local chefs sharing plant-based recipes."There's no question that plant-based food is the future, so watch as visionary, veg-based Pittsburgh chefs, from top local restaurants, present recipes and tips that will only add to your eating excitement!" states the show's Facebook page. The first episode airs on March 22 on YouTube.

Some of Pittsburgh’s biggest stories were documented in tweets; other tweets were the story