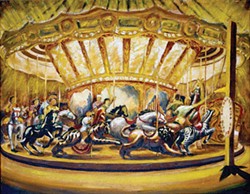 It's not always easy to appreciate an artist's early or student work. Take, for instance, a Jackson Pollock that mimics Thomas Hart Benton or a figurative abstraction by Mark Rothko. But in the right context, such work can clarify the often circuitous and fortuitous journey that an artist takes towards mastery.

At the start of the exhibition are three portraits by Pearlstein of the principal characters in this tale. A self-portrait shows Pearlstein in bright Fauvist colors, while one of Cantor is more subdued. Between the two is a smaller painting of Warhol in pale yellow, blue and brown. In his self-portrait, Pearlstein faces the viewer, staring intently ahead, while in the others, Cantor and Warhol appear reserved and pensive. This grouping, all dated 1950, is perhaps the most poignant in the show, as by that time they were all living in New York; Cantor and Pearlstein got married that year; and, as Pearlstein, now 91, explains in his catalogue essay, "Andy and I parted ways that spring." However, they remained good friends until their relationship cooled in the late '50s.

Pearlstein, Warhol and Cantor met as students at Carnegie Tech (now Carnegie Mellon University). Each grew up in different neighborhoods in Pittsburgh. In 1941, while he was still in high school, Pearlstein's "Merry-Go-Round" — on display in the first section of the exhibition — won first prize in Scholastic magazine's 14th National High School Art Exhibition. It was reproduced in Life magazine along with another painting of his, called "Wylie Avenue Barber Shop," which won third prize. Reginald Marsh was on the awards jury, and it is interesting to note that Pearlstein's "Kennywood Park," a painting hung nearby, looks to have been influenced by Marsh's style.

In Pearlstein's recollection, it was in painting class that Warhol asked him, in regard to the reproductions in Life, "How does it feel to be famous?" Pearlstein, who had by this time already been overseas for the war and returned to college under the G.I. Bill, replied: "It only lasted five minutes." This was their first exchange and it is almost mythic given the trajectory of their careers and lives.

Although, unlike Warhol, he never became a household name, Pearlstein went on to great acclaim and to wield considerable artistic influence. But this show is not about their careers as visual artists. Instead, it stops just at the cusp of their mature work. The exhibition presumes that the viewer already knows a lot about their later work, and this makes the show feel somewhat disjointed and truncated.

Otherwise, the exhibition has much to offer. It sheds light on the artists' schooling, camaraderie and struggles in the early years. It shows how they were influenced by modernist and avant-garde art, by their professors and peers, and by what they saw at Pittsburgh's innovative Outlines gallery. Pearlstein's early work demonstrates his meticulousness, his unorthodox approach to cropping and spatial arrangement, and his knowledge of art history, design, architecture and music. Warhol's offbeat irreverence and rebellious nature is evident, as is his drive and ambition. It is Cantor's work that offers the biggest treat. Her studies of Pittsburgh and New York bridges as well as highways, subway tunnels and other aspects of the built environment are reminiscent of Georgia O'Keeffe and Arthur Dove. Cantor showed briefly in New York before she stopped making work to raise her family.

Ultimately, as these artists established themselves in New York, their careers evolved, ended or diverged as each pursued his or her own path. Around 1962, Pearlstein began to paint the studio-posed nudes with which he is most closely identified. Several are on display as "a coda" to his narrative. Because he is committed to realism and to using the nude figure as a form of still life, Pearlstein's models have always been shown with eyes averted. However, in what co-curator Beck terms "a thrilling departure," one of the models in "Two Models With Three Masks With Turkish Rug" looks straight ahead. Her confrontational pose is an interesting counterpoint to Pearlstein's self-portrait at the beginning of the exhibition. It's as if one looks boldly into the future at the other staring back. And just around the corner, there is Warhol's own self-portrait from 1944, offering a tentative sideways glance.