An exhibit documents the making of a Hitler youth.

The Hitler Youth promised recruits the opportunity to be heroes. And in a totalitarian regime where the ultimate heroic act was dying for one's country, that's what many recruits got.

On display at Pittsburgh's American Jewish Museum is Tempted, Misled, Slaughtered: The Short Life of Paul B., a collection of photographs, military documents and propaganda that shows how the Nazis convinced millions of young boys to engage in a veritable suicide mission.

"The most important thing that you learn from this [propaganda] is that the nation is more important, the flag and what it symbolizes is more important, than your friends, your family, the church, everything. The most glorious thing for you is to die," says Edie Naveh, director of the Holocaust Center in Pittsburgh.

Tempted is part of the citywide Light/The Holocaust and Humanity Project (led by Pittsburgh Ballet Theatre), which culminated with the mid-November anniversary of Kristallnacht. The exhibit is a series of panels created by the Florida Holocaust Museum and the Nuremburg Documentation Center to explain how 3.5 million German children became soldiers serving the Third Reich.

For its Pittsburgh incarnation, the touring exhibit adds a video monitor that screens a feature-length propaganda film, 1933's Hitler Youth Quex, to emphasize how the media bombarded Germans with Nazi propaganda from all sides.

Paul Bayer was among those converted into a strange hybrid of child and soldier. Born to a Würzburg power-plant manager and his wife in 1926, Paul was inducted into the Cubs of the Hitler Youth at age 10.

The enlarged photos that emblazon the exhibit's wall plaques include a postcard Paul wrote to his parents, adding "Heil Hitler" to his signature. There are also somewhat surreal images of baby-faced youths operating machinery while wearing adolescent-sized Nazi uniforms, just like the adult soldiers.

And although they no longer don Nazi regalia, child soldiers are with us still. The exhibit's final panel displays several recent photos of child soldiers in Afghanistan, Sierra Leone and Peru, reflecting the disturbing truth that many nations continue to breed children to die in the line of fire.

"The Holocaust Center is so involved with educating middle school and high school youth," Naveh says -- students who are the same age as the German soldiers featured in the exhibit. Tempted explores "[w]hat it meant at that time, growing up in a society manipulating and inculcating youth, and using them for their own purposes."

The Hitler Youth promised children a diversion from the mundane, and a chance to be taken seriously by adults. The group capitalized on male adolescent fantasies of war that are usually pantomimed on a playground rather than played out with real weapons.

The Hitler Youth convinced youths to act like the children in the first-grade reader displayed here: marching bravely into battle, proudly waving the swastika. The passage beneath reads, "The troop starts singing, I am submitting myself with heart and hand to you, my country, full of love and life, my German fatherland." 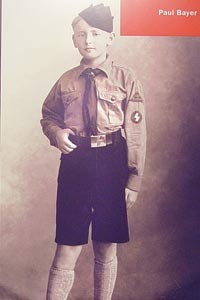