“People can buy their own water.” 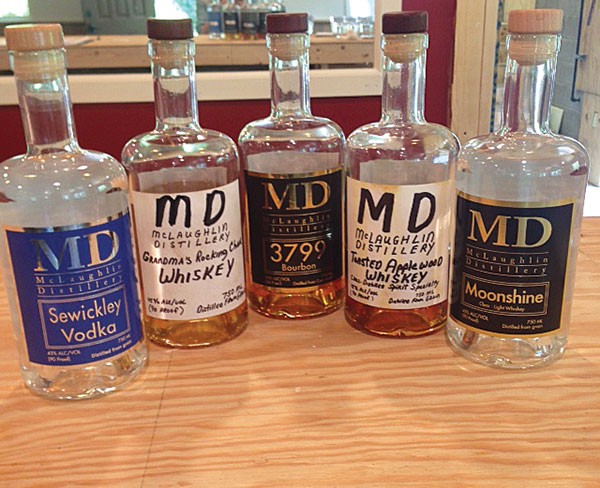 Drive a curving road in Sewickley and you’ll spot a small plywood sign that says, “Welcome. Yes. This is IT!!!” McLaughlin Distillery is the new venture of Kim McLaughlin. McLaughlin grew up in a family of distillers and learned from relatives. “I don’t want to say how long I’ve been doing this, but I’ve had quite a bit of practice,” he says, laughing.

McLaughlin has had practice at many things. He spent four years in the Marines and 22 as a dairy farmer before landing in Western Pennsylvania to work in the oil and gas industry. Distilling was a hobby. Two years ago, eager to escape an unfriendly boss, he started work on his distillery. When he was laid off, four months ago, he made distilling his full-time job.

McLaughlin is involved in every aspect of his business. “I’m kind of handy but also cheap,” he jokes. He’s spent a year gutting and rebuilding, down to milling the lumber for the wainscoting, and turned a former flophouse into an airy and inviting distillery. He mills his own wheat, coopering and charring each white oak barrel. “I do everything but grow the grains and crack the corn,” he says. To bring things full circle, his spent grain goes to area farmers. He distills, barrels and bottles, all in-house. He has several volunteers, but it’s impossible to ignore his work ethic and devotion to quality.

McLaughlin is starting with five products: Moonshine, Sewickley Vodka, 3799 Bourbon, Toasted Apple Wood Whiskey and Grandma’s Rocking Chair Whiskey. All ring in at 90 proof because, as McLaughlin dryly riffs, “People can buy their own water.” The Moonshine is hot but not astringent, and a delightful departure from most ’shine. Sewickley Vodka, distilled seven times, is slightly sweet, which McLaughlin credits to care and the area’s excellent water. The 3799 bourbon is smooth and rich in vanilla notes and filtered just once, leaving it lightly malty. Try the Toasted Apple Wood Whiskey and discover an airy, dry whiskey that lacks the heaviness of bourbon and would be excellent in a cocktail.

Finally, Grandma’s Rocking Chair Whiskey is both novel and tasty, with a round, oaky flavor that lacks the punchiness of other woody liquors. The name comes from the motorized rocking chair that McLaughlin rocks each barrel on for three weeks. The whiskey rolling over the inside of the used bourbon barrel is what sets its flavor apart.

Presently, while he has garnered his federal, state and municipal licensing, he’s working to meet code to open to the public. But “the door is open for anyone who wants to visit,” he says. He also does tastings and home delivery, and sells his products online. While you wait, get a sip of McLaughlin’s product at Bar 12, on the South Side; Revel and Roost, Downtown; and 99 Bottles, in Carnegie.