An Evening at Armand’s

I walked in on an unassuming night, chasing the simply-bulleted online menu: “The Special.”

It was hard to believe that 2028 would finally be the year Chef Curtis Gamble’s new concept restaurant, Armand’s Bar and Grill, would re-emerge out of Neu Lawrenceville’s recently extended Liberty Avenue.

I walked in on an unassuming night, chasing the simply-bulleted online menu: “The Special.” The haze of Armand’s red lights and stale air was just what I needed to shake this April snowstorm, but I had no clue that the real experience Gamble had in mind would end up being so sexy. 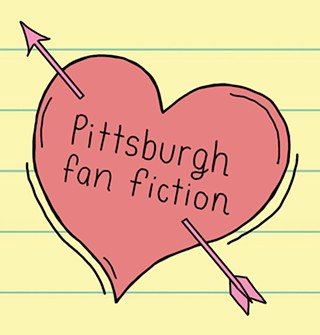 I stood at the bar next to Android Fred Rogers, who was sharing a pop with Rick Sebak. “Hi neighbor,” Fred greeted. Sebak, out of breath, his clothes stained with a mixture of what looked like fresh cream sauce and sweat, peeked his signature smile from his mustache. “… Incredible, but it’ll cost you,” he whined. He was no doubt talking about The Special. Gamble, who had been behind the bar the whole time, spraying cigarette-smoke-infused pork floss into the ventilation system, motioned to the fryer behind him. “I know what you want.”

I took out my money, wrapped in a gumband, and revealed a fresh Lincoln. “The Special, Chef.”

Gamble shoved his bare hands, fingers glowing with gold rings, into the fryer. He lifted them out, gripping his voluptuous cod, and ripped it to shreds. Stuffing the pieces into my cargo shorts, he whispered sweetly, “I know you like it dirty.”

That’s right; I did like it dirty. I liked it dirty, and I liked it sexy. “Tonight,” the chef mewled, “you are The Special.” I felt my pants tighten, and it wasn’t because they were full of cod.

He used his bare, fishy hands to dress me in butter. Sebak licked his lips as Android Fred Rogers moved to a nearby piano and started playing Scott Joplin’s 1902 ragtime hit “The Entertainer.” The next three minutes of erotic bliss began with Curtis Gamble wrapping me in honey-baked turkey slices so thin you could see through to my Grateful Dead Steelers shirt. You know the one. Gamble took off a sneaker and emptied its contents over me — a traditional cheese sauce, marinating for days under his footsteps. The chef flipped a switch below the bar, and the Marlboro pork floss hummed through the air, covering every exposed inch of me. Mmmm.

I walked to the back to clean up, covered in foot-fermented béchamel, lips throbbing from what Gamble put in my mouth. I opened the bathroom door to see three strangers, naked, rubbed with sour cream, stuffing each other like pierogies, groaning in an intimate, fried-onion-topped embrace. Turned to a human Devonshire, I realized what Gamble meant when he wanted to bring the culture of Pittsburgh’s smokiest dive back to town. I ripped off my turkey-wrapped clothes and added my kielbasa to the pile. Just another night at Armand’s — all that was missing was the Ranch.