An American Pickle has some flavor, but could have brined a little longer | Screen | Pittsburgh | Pittsburgh City Paper 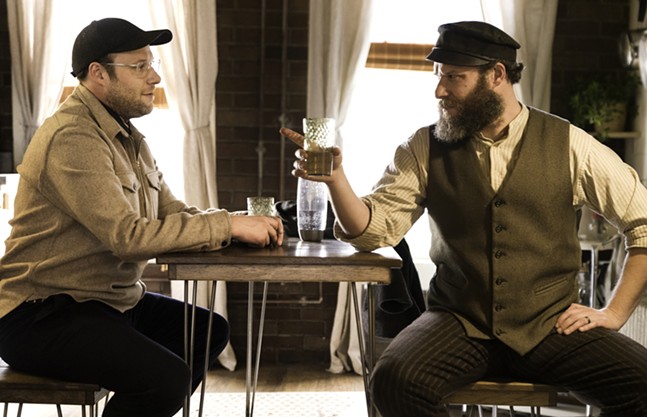 Photo: Hopper Stone/HBO Max
Two Seth Rogens drinking seltzer, as Jews do.
In the fall of 2018, which feels like another lifetime ago, it felt like a big deal that Seth Rogen was filming a movie in Pittsburgh. Not just that, but a pickle-themed movie in a city with a prominent annual pickle festival.

An American Pickle, which debuts on HBO Max on Aug. 6, brings Pittsburgh-as-New-York to life in a strange, uneven, but intriguing comedy about an Eastern European Jewish immigrant who comes to America in the early 20th century, only to promptly fall into a vat at the pickle factory, where he is preserved in brine for 100 years.

Herschel Greenbaum (Seth Rogen) lives in a poor, Eastern European village, where he works as a ditch-digger. His village is often subjected to pogroms, and his life generally sucks, but he meets his wife Sarah (Sarah Snook), and together they escape to America. Their dreams are humble: Sarah wants to be rich enough to afford her own gravestone, Herschel wants to try seltzer before he dies. When Hershel gets a good American job smashing rats at the pickle factory, all seems well — he even buys a pair of grave plots — until he falls into a vat of pickles that preserves him for 100 years, leaving a pregnant Sarah behind.

Flash forward to 2020 when Hershel emerges from a dilapidated pickle factory, only to discover that his wife and unborn child are long gone, and his only living relative is great-grandson Ben Greenbaum (also Rogen), a prototypical Brooklyn resident who works a vague freelance job, has a fridge full of kombucha, and wears big glasses. Herschel doesn't understand anything about the modern world, from the iPhone app that Ben is developing, to mass food waste, to an Amazon Alexa device. (One of the best scenes is Herschel learning about SodaStream carbonators and tasting seltzer for the first time.)

But he is most perplexed by the way Ben does not actively mourn his parents' death. Herschel is also angered to find that Sarah's gravestone is in a seemingly abandoned Jewish cemetery by the highway, with a giant billboard above it advertising vanilla vodka. When Ben's app fails, Herschel suggests they start a pickle empire, so Herschel can afford to buy and destroy the billboard above Sarah's grave. But the two butt heads, become quick enemies, and Ben repeatedly sabotages Herschel when he goes viral as a weirdo selling rainwater pickles on the side of the street.
The source material for An American Pickle is the New Yorker short story "Sell Out," by Simon Rich, who also wrote the screenplay for the movie. The short story is a laugh-out-loud parody of the dumbest parts of modern life, as told through the eyes of a 1920s Jewish immigrant. The movie, while it's still a comedy, is interlaced with more melancholy, mourning, and explorations of Jewish identity. There are some jabs at grating parts of modern culture, like clickbait articles about Herschel that say "Does Herschel have big dick energy? Obv." But other jokes are redundant of already well-trod territory, like Ben making fun how many kinds of milk there are nowadays (there have been alt-milks for decades now, move on).

The movie, more so than the short story, explores the different ways Herschel and Ben grieve: Herschel a practicing Jew from another era, recites the mourner's kaddish at Sarah's grave, and upon learning Ben's parents are both dead, wants him to do the same. Ben, like many American Jews of his generation, doesn't practice religiously and identifies more with Jewish cultural aspects. He's not open about his grief over his parents, and scrolls through a Buzzfeed article about animal friends on his phone while Herschel says his prayer. This part of the story, an alternately funny and touching exploration of old vs. new Jewish identity, feels disjointed from the other part of the movie, which parodies virality, cancel culture, and free speech debates through the lens of someone from 1920.

Since Herschel is from a very different time, he says things that would today be considered wildly inappropriate, like that someone who doesn't throw a punch in a fight has "polio arm" and that disagreeable women must be menstruating. Jealous of Herschel's success, Ben uses his great-grandfather's backwards beliefs to destroy his newfound pickle fame. At first, it backfires and Herschel only becomes more beloved by right-wing crowds. But when he goes too far, all sides turn their back on him. Without spoiling too much, by the end of the film you'll find yourself saying "how the hell did we get here?"

It makes for an interesting parody of the whiplash of modern culture, wherein someone goes viral, becomes a beloved figure, is found to have problematic views, is so-called "canceled," and then finds support from a group of people who specialize supporting people who say offensive things. But that aspect of An American Pickle feels disconnected from the part that is interested in exploring Jewish identity. Screenwriter Rich seemed more interested in the former, while Rogen seems more interested in the latter. Like many millennial and Gen Z Jews, Rogen seems to be going through a period of exploring what his Jewish identity means to him.

In an interview with Haaretz, Rogen called it "the most Jewish movie I've ever made" and reflected on how, two days before the film started shooting in Pittsburgh, the Tree of Life shooting happened, bringing into focus why making the film was important. It felt like some of the reasons Rogen wanted to make the movie got lost amidst Herschel and Ben's rivalry that leads them down a path of mutual self-destruction. The source material that made the movie possible in the first place, may have dragged it down in the end.

Despite its flaws, An American Pickle is still enjoyable, with enough real laughs to make you forget about the world for five minutes. And Rogen as Herschel is some of his best acting in a long time.

In case you're wondering, there are several Pittsburgh sites visible, including Downtown, the Allegheny Cemetery, Butler Street, and the East End Food Co-op. In one of the most Jewish jokes of all, Herschel asks if Jonas Salk, the University of Pittsburgh scientist who invented the polio vaccine, was Jewish. He pumps his fist in excitement upon learning that yes, he was.