An American in Paris at Pittsburgh CLO 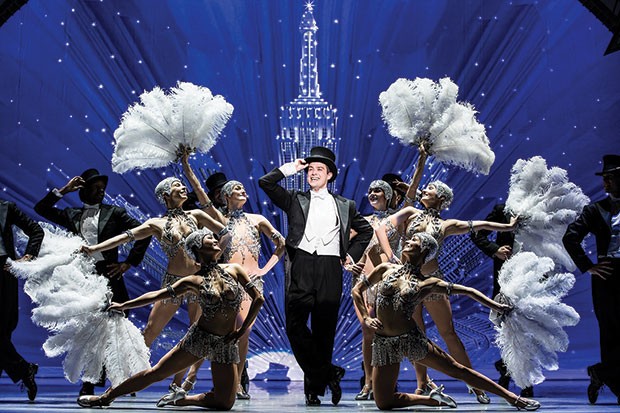 AN AMERICAN IN PARIS

There are two types of Gene Kelly fans: Team Singin’ in the Rain, and Team An American in Paris. I’ve always run with the former, finding the latter to be an overly cute soufflé of a movie wrapped around a playlist of pop tunes by the Gershwin boyz — sort of a proto-Mamma Mia! — enriched by the peerless imagination and grace of its choreographer/star.

On stage, though, a touring version of An American in Paris, in town courtesy of PNC Broadway in Pittsburgh and Pittsburgh CLO, is a much more embraceable montage of music and movement, a cross between a Broadway musical and a quotidian ballet. And there’s even some extra Ira and George to enjoy: Who could ask for anything more than “I’ve Got Rhythm,” “But Not For Me” and “The Man I Love”? ’S all wonderful enough.

Set in Paris, just after World War II, the story revolves around Jerry Mulligan (McGee Maddox), an American ex-GI painter in love with Lise (Sara Esty), a beautiful young French ballerina committed to Henri (Nick Spangler), whose family saved her during the Occupation. They work it out through song and dance, including the titular ballet — merely imagined, by Jerry, in the film, but real in the stage musical.

This iteration of American in Paris matters for its dance, and director Christopher Wheeldon’s Tony-winning choreography is fluid and occasionally spectacular, handsomely performed by the company’s capable cast. The four leads (including a charming Etai Benson as a sardonic lovesick composer/pianist with a gammy leg) all have standout moments, although Maddox, a ballet dancer by training, lacks Kelly’s taut muscularity — hardly a sin, but hard not to notice — and even his predecessor’s pleasant voice.

Lush video backdrops enhance the show’s gorgeous design, adding depth to the stage, and Craig Lucas’ book goes a little meta when Henri, who secretly sings in a café (his élite family would not approve), imagines a dazzling version of his rather clumsy cabaret act. The Gershwin tunes still got it, and the thin story is a little darker here than the movie’s, if not for long. More than ever, it’s the fidgety feet that make this truffle so sweet.

Game On is a musical journey through life's regrets, joys, and second chances