Before there was curbside pickup, online ordering, and anything resembling a palatable bourbon available, Fine Wine and Good Spirits – or the "state store," as my parents called it – took their chances on hiring a young alcohol sales upstart who was yearning to stock their bottom shelves with handles of Burnett's vodka.

In the early aughts, I did seasonal work at Pennsylvania liquor stores during breaks from college. I had two ties (you had to wear a tie during Fine Wine's Golden Age), and was very likely the youngest employee at any of the stores. And I would know, because I worked at every one of them. At least it seemed like it.

I’m still not sure where Mt. Oliver is, but I worked there. I was a cashier at two locations in Downtown, two stores in Mt. Lebanon, the South Park Shops’ location, a shelf-stocker at two warehouses, in addition to positions at countless other locations.

You know what’s really cool to a 20-year-old college student? You got it: a giant, wooden Wild Turkey shelving display that no other employee in their right mind would want to take home. That sucker looked great in my college apartment, though. And so did the Three Olives wire bottle rack on which I proudly displayed my collection of Boone’s Farm, the Snow Creek Berry flavor being my real showpiece. 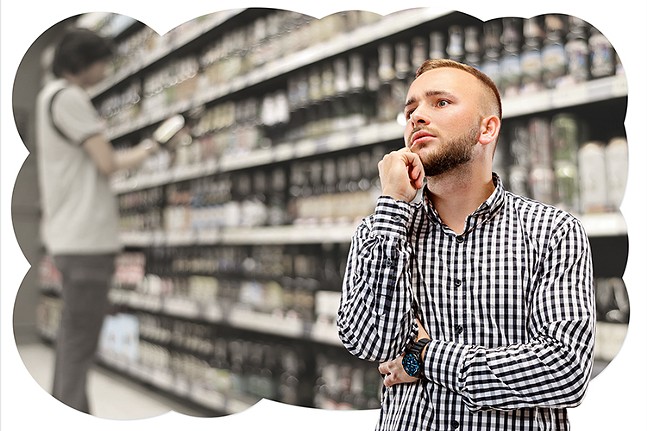 The procedures in every store were exactly the same, which is nice when you are the utility infielder of your regional food and beverage local. There were stores where all the alcohol was behind the counter. Stores where you could smoke at the register, which I may or may have not done during my misspent youth. If you’ve never unloaded over a hundred cases of holiday booze staples from a truck at 7 a.m. in 15-degree weather, I highly recommend it.

It was a guarantee that each store had at least one real character that every other employee talked about. There was the manager who wanted to teach me how to play harmonica and was regionally renowned for better or worse, depending on whom you spoke with. And there was an almost-retired warehouse employee who would drive me around on deliveries, buy me Subway for lunch, and tell me stories about sordid things he did in Mexico.

And maybe there’s a current employee talking about the idiot who would take every piece of promotional material home with him. Such is the wild and wonderful world we Pittsburghers know as the only legal way to get brand name booze.