An Act of God at Pittsburgh Public Theater

Playwright David Javerbaum has set out to destroy spirituality 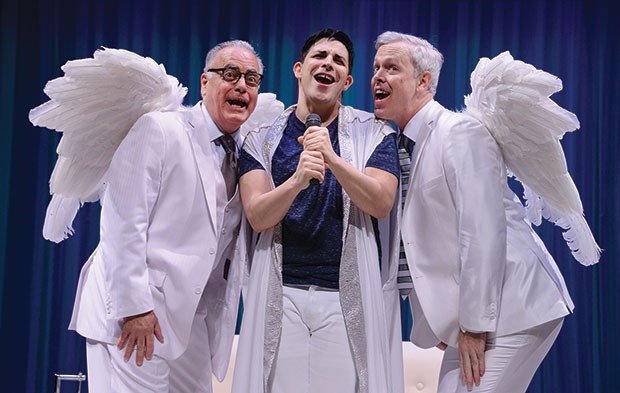 Photo courtesy of Michael Henninger
Left to right: John Shepard, Marcus Stevens and Tim McGeever in An Act of God

AN ACT OF GOD

There’s a certain type of “religious” show — Do Black Patent Leather Shoes Really Reflect Up?, The Book of Mormon, Nunsense, to name a few — that spends an act-and-a-half getting big yuks out of the loopiness of faith only, in the final 15 minutes, to recant everything and close out with a heartwarming “but still, God is great and loving and etc.” As a flaming atheist, such inconsistency always annoys me, so I’m very pleased to tell you about An Act of God, making its Pittsburgh debut at Public Theater.

The premise of this 2015 play is simple: God adopts a human form for one evening and, accompanied by archangels Gabriel (as in “blow”) and Michael (and in “row”) takes over the Public’s stage to present an updated version of the Ten Commandments.

What’s really happening is that playwright David Javerbaum, under cover of nonstop one-liners, has set out to destroy spirituality. And no, I don’t mean organized religion, or rather just organized religion. I’m talking the concept of belief itself.

He doesn’t do it by attacking God. His God — though funnier than the original — is the brutish, murderous, can’t-be-bothered God we’ve all read about in the Bible, the torturer of Noah, Abraham and Job. Javerbaum is attacking the people who created God … people. And, if our God is everything we say He is, then we must be insane in either the creation or the worship. I find such clarity refreshing, but judging from some of the displeasure I witnessed around me in the O’Reilly Theater, I may be in the minority.

If their God did come to earth, He could hardly pick a better vessel to inhabit than Marcus Stevens. A Point Park graduate and now star in New York, Stevens is more adorable than any human being has a right to be, and with his perky show-biz manner he manages, with Ted Pappas’ swift and spot-on direction, to give Javerbaum’s dark material a highly entertaining sheen.

Being more of an essay than an actual play, An Act of God becomes a bit monotonous near the end of its 85 intermissionless minutes. But Stevens and Pappas barrel through to the finish of a surprisingly blistering, but hugely entertaining show.